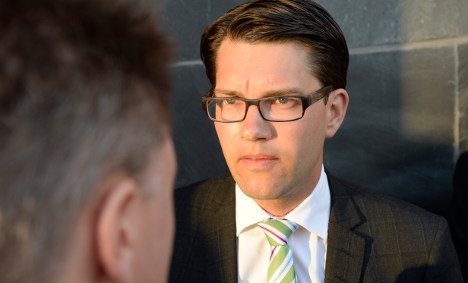 Jimmie Åkesson. Photo: Bertil Ericson/TT
With elections less than a month away, you'd be forgiven for thinking opposition leader Stefan Löfven will walk away as prime minister with no questions asked.
Indeed, the 57-year-old former welder has been a trailblazer in the polls for months, and the governing Alliance is still 7.7 percentage points behind the Red-Green bloc.
But the competition heated up this week when Prime Minister Fredrik Reinfeldt brought the red-hot topic of refugees onto the agenda, asking Swedes to open their hearts, show tolerance, and feel comforted by the fact that the Alliance could financially deal with the influx.
With this in mind, and considering it's unlikely that either bloc will win a majority of the votes, The Local turned to Social Democrat and political commentator Stig-Björn Ljunggren for the lay of the land.
He offered two potential outcomes for September 14th.
"The first scenario is that we get a new government, and I think this would more likely be due to people being pushed away from the Moderates rather than being pulled towards the Social Democrats," he explained.
"Some people are bored with the current government, some think they're incompetent, and some are just looking for a change. As a result, we'd get a minority government with the Social Democrats and the Greens. And in the long run, they'll try and make some kind of bloc in the central ground with parties from the other side. Löfven has long shown distaste for the traditional left and right."
The second result would see Prime Minister Fredrik Reinfeldt getting his third four-year term in office.
"And he'll only remain in power due to indirect support from the Social Democrats. He will tell the Red-Greens that if they want to form a minority government, they'll need to take on the Left Party, which Stefan Löfven doesn't want," Ljunggren explained.
But where it gets both interesting and complicated, he explained, is how the Sweden Democrats come into play.
"The reason the Sweden Democrats are major players, despite only having five or ten percent of the votes, is because of the rigidity of the bloc system. As no party on either side of the bloc is willing to support the other side, the Sweden Democrats have the key. And since no one wants to touch them, it becomes problematic."
Why? Because the nationalist party led by Jimmie Åkesson would hold the balance of power. Since the Swedish system is one of negative parliamentarianism, this opens up a can of worms. Negative parliamentarianism means that a government doesn't need to be actively supported by a majority of MPs – it just needs there not to be a majority actively voting against it.
The consequence is that abstentions can play a key role.
If, for instance, the Sweden Democrats choose to abstain in a parliamentary vote, and all the Alliance parties vote against a red-green government, then Stefan Löfven cannot be prime minister even if the combined forces of the red-green parties have more seats.
But if Reinfeldt chooses to resign, speaker Per Westerberg will select the person he thinks has the best chance of forming a government. This is likely to be the leader of the largest party (probably Löfven), or possibly the leader of the largest distinct bloc (for instance, a successor to Reinfeldt as Moderate leader).
The political scientist explained that the Sweden Democrats will essentially have the same role as the Greens did several elections ago, but the difference is that no party had any problems in principle talking policy with the Greens.
And considering the Sweden Democrats are likely to side with the Moderates, as they've supported the Alliance in around 90 percent of votes in parliament, the possibility of Reinfeldt winning again appears all the more likely.
"Of course, the Sweden Democrats might want something in return," Ljunggren mused. "But the Moderates have said they won't do any kind of negotiation."
So with what appears to be a very complicated election on Sweden's hands, how exactly will it pan out?
"If I had to guess now it'd be the Social Democrats with the Greens," Ljunggren said, adding quickly that he'd be keen to see the polls after Reinfeldt's refugee speech.
"If his comments become the game changer he was hoping for, then I might change my bet."