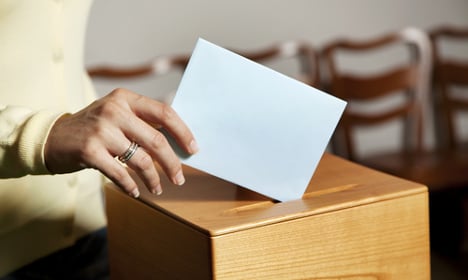 Casting a vote. Photo: Shutterstock
Why is Sweden holding elections now?
There are elections in Sweden every four years. There are 349 seats up for grabs in the national parliament (Riksdag) and registered voters will also choose the next politicians to make up 21 county councils and 290 municipal assemblies.
Can I have a say?
You have to be a Swedish citizen aged 18 or over to vote in national elections. But if you're from the EU, Iceland or Norway and you're registered as living in Sweden, then you can have a say in municipal and county council elections. People from outside Europe who have been in Sweden for more than three years may also be allowed to vote locally. In total around seven million people are eligible to go to the polls.
Where do I vote?
If you're allowed to vote, you should get a voting card in the post, giving you the details of your nearest polling station. Don't forget to take along your ID. Some municipal buildings and libraries allow you to vote in advance. Swedes living abroad can vote by post. If you're sick, disabled or elderly, you can send someone else to vote for you.
How do I vote?
Sweden uses multi-coloured ballot papers. Yellow is for the Riksdag election, white is for municipal elections and blue is for county council elections.
Once you've worked out what colour you need, you can then choose from three different types of ballot paper. One allows you to pick from a list of candidates, another simply identifies the party you want to select and the third is blank for you to write down your preference in your own words. Photo: Pontus Lundahl/TT
How are the winners chosen?
Like most of Europe, Sweden uses a system of proportional representation, which means the number of seats a party wins largely reflects the share of the vote it gets nationwide. The exception is that parties winning less than four percent of the vote are excluded from the Riksdag and parties securing less than three percent of the vote at county level cannot participate in local government.
How will we know which party has won?
Ballot papers start being counted by hand as soon as the polls close and each polling station passes its figures on to Sweden's Election Authority. A provisional result in the national poll is usually announced on election night, with local election figures being released later in the week. The Local will keep you updated on our Elections Blog.
So when do we find out who the next Prime Minister is?
This is where it gets complicated.
If one political party wins an absolute majority of seats (more than 50 percent) then its leader will be chosen as Prime Minister. But this is rare in Sweden, where there are a large number of parties to choose from.
So, if no party wins an absolute majority, the group with the largest number of seats will try to form a government by building a coalition with other parties that share some of its ideals. Since 2006 there has been a centre-right Alliance in Sweden, led by Prime Minister Fredrik Reinfeldt and his Moderate Party. The current coalition also incorporates the Liberals (Folkpartiet), the Centre Party and the Christian Democrats. The Alliance has said it seeks renewed confidence to continue its work after the 2014 election.
The Social Democrats previously made a pact to form a coalition with the Greens. This was abandoned in 2010 but the parties haven't ruled out working together in future. The Left Party (Vänsterpartiet) is often lumped in with the red-greens in polls, but it remains unclear whether it will form part of a red-green coalition.
In 2014, the potential success of smaller parties such as the nationalist Sweden Democrats and the Feminist Initiative could have a key impact. If these parties do well, they could upset the balance in parliament and make it harder for traditional larger parties to form a coalition. These parties may be forced to compromise on some of their key policies or form unusual alliances. If this makes the government appear too unstable, there could even be calls for a fresh election.
Sweden's elections – who's who?
For more information on how elections in Sweden work click here (PDF).