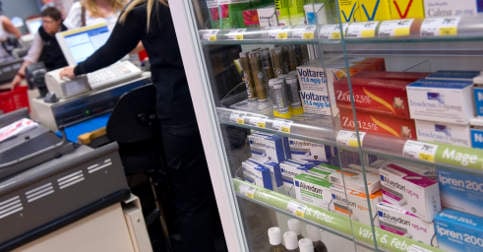 The pharmacy section of a grocery store. Photo: Fredrik Sandberg/TT

Prescription-free paracetamol tablets have been available at Swedish grocery and convenience stores since November 2009. Today there are an estimated 5,600 locations selling the pain-killers.

But the Swedish Medical Products Agency (Läkemedelsverket) has now suggested that this freedom be revoked.

An increase in the number of paracetamol poisonings has coincided with the medicine's increased availability, the agency said.

"We have conducted a big investigation and this is our solution, and I think the move will be followed through unless something unexpected comes up," agency spokesman Mårten Forrest told The Local.

"This is a big question – and when it comes to suicidal behaviour and healthcare, this is one piece of the puzzle where we can actually play a preventative part. Attitude and knowledge on drug use is a big issue and many of these intoxications are not deliberate. This move would be one way to tackle the problem, and it's our role as a government authority to do this."

The number of calls to the Swedish Poisons Information Centre (Giftinformationscentralen, GIC) due to paracetamol poisoning was about 2,500 in 2006. In 2013 that number had reached 4,400.

Of those instances, there were 529 which resulted in hospitalization in 2006. By 2013 the numbers rocketed to 1,161, and the agency said it appears the trend has continued in 2014.

As paracetamol pills account for the majority of poisonings, the agency has concluded that the pills should only be available at pharmacies from March 1st, 2015.

Liquid paracetamol and effervescent tablets will still be available at other locations.

The agency's official suggestion has been sent to affected drug manufacturers, who have three weeks to express their views and concerns.