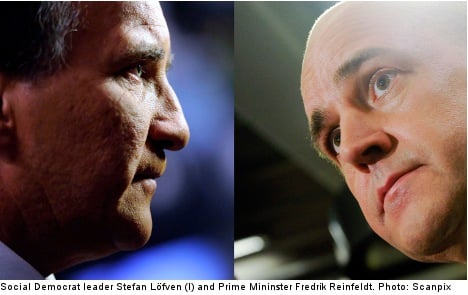 The survey conducted by pollster Ipsos revealed that 43 percent of respondents backed Reinfeldt to steer Sweden though a crisis situation. Löfven earned 29 percent when the same question was put to the 1,540 people quizzed for the poll, which was published by newspaper Dagens Nyheter.

Reinfeldt had an even greater advantage when it came to who voters felt would better represent Sweden abroad. The incumbent Prime Minister, who has been in office since 2006, was backed by 61 percent of those surveyed, compared to 19 percent for the leader of the opposition.

"It's no surprise that Fredrik Reinfeldt is the preferred choice when it comes to representing Sweden abroad," David Ahlin, head of communications for Ipsos, told the newspaper.

"Foreign policy and the work of the EU are important parts of the prime minister's work and he is one of the EU's most experienced prime ministers. It is definitely his strongest card."

However, Reinfeldt was left trailing when it came to inspiring hopes for a better future for Swedes. Löfven was backed by 49 percent while the current prime minister received 28 percent.

The leader of the Social Democrats was also backed by more people to secure a majority in the parliament to get his policies through with 42 percent.

Don't miss: Sweden elections: How do they work?

Reinfeldt managed 32 percent when the same question was posed but had the edge by 7 percent when it came to who voters felt could lead the government's work, with 41 percent.

Ahlin added that both candidates had earned praise from potential voters for how they tackled the recent forest fire crisis which engulfed Västmanland in central Sweden.

Meanwhile a new survey carried out by Sifo has suggested that the opposition will win with a narrow majority, and that the Sweden Democrats may hold the balance of power.

The survey, published in newspaper Svenska Dagbladet, gave the opposition a 10.7 percentage point lead over the current centre-right Alliance. The Sweden Democrats, meanwhile, would get 10.1 percent of the vote on election day, the survey found.

This tallies with what a leading political scientist told The Local earlier this week. Stig-Björn Ljunggren said the right-wing party may end up being the key player after all the votes are counted due to the bloc system. A total of 175 seats are needed for a government to form a majority.

Swedes go to the polls on September 14th.