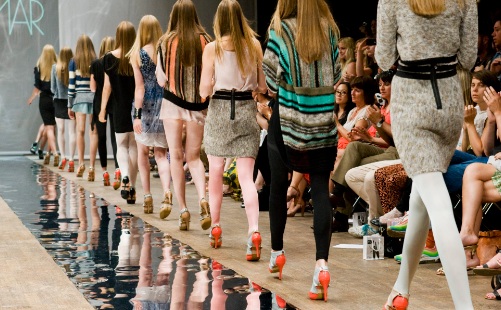 It's time for Fashion Week, folks. Weak at the knees already, envisioning the flood of black-clad Stockholmers obscuring the streets? You may find there's more to Swedish fashion than you thought. So knuckle down – this could take all week.

A – Acne (Ambition to Create Novel Expression). Arguably Sweden's biggest fashion export (after H&M of course), Acne founded in 1996 started as a jeans company but is now so much more encompassing ready-to-wear, womenswear and menswear collections and showing at Paris, New York, London Fashion Weeks.

B – Black. Fashion loves black and so does Sweden. Stockholm's women in particular – much like their Scandinavian cousins in Copenhagen, Denmark – have a long-standing love affair with black. Summer, winter, rain or sunshine; black is always appropriate.

C – Clean lines and minimalism. If there's one thing Swedish fashion is it's clean: lines, cut, fabrics; regardless of the season or brand, minimalism is central to the Swedish design ethos.

D – Denim brands. The fashion world was reawakened to Swedish fashion in the mid-late nineties when denim brands Acne, Nudie Jeans and later Cheap Monday in 2000, took the fashion world by storm. Skinny jeans were in and Sweden was ready with enough cool, casual slim-fitting denim to clothe the world. Scandi-cool style was born.

E – Edge. Swedish fashion is renowned for its cool casualness but Swedes also love an edge; leather jackets, rock-inspired all-black ensembles and anything else rock, goth or punk-derived.

F – Filippa K was another nineties brand, but still has its kick. Founded in Stockholm in 1999, Filippa K boasts stores in twenty markets worldwide and plays to that most Swedish of style aesthetics, minimalism and great slick design.

G – Gothenburg is on the rise. With Nudie Jeans already a major export for the city, Sweden's number two has its own budding fashion scene including bow-tie makers, The Bow Club, a set of vintage-inspired labels including Vintage by Fé and Nic and Mel, and hipster favourite, Velour.

H – Hennes and Mauritz; the biggie, the unavoidable, the king of high-street retailers. H&M is a world-wide phenomenon thanks to its affordable clothing lines, trend-driven designs and collaborations with some of the world's most prestigious designers.

I – Ice, snow and other wintry conditions. Sweden's dynamic climate is a massive consideration for its designers and residents alike. How do Swedes survive minus temperatures? Long, padded coats, big black boots, beanies and regularly-serviced central heating.

J – J. Lindeberg. Yet another of Sweden's nineties fashion brands, J. Lindeberg was founded in 1996, has shown at fashion weeks in New York, Beijing, London, Milan and Stockholm, and has a sportswear line are worn by some of the world's best athletes.

K – Kling, Elin. Sweden's number one fashion blogger and model. Her daily photo posts of her enviable lifestyle and wardrobe mean she is a regular at fashion week and a must-know blogger for all Scandinavian style fans.

L – Leisure-wear. Sweden boasts magnificent countryside, great national parks and seasons that permit fun sporting activities such as volleyball in the summer and cross-country ice-skating in the winter. So Swedes do leisure-wear very well. Warm jackets, comfy boots and running gear for all occasions – even just for walking the dog.

N – Nudie Jeans, one of Gothenburg's most successful exports, can be seen on Zac Efron, Vanessa Hudgens and Jennifer Aniston. Not bad for a small label from the west coast.

O – "Off the wall." Vans, Converse and other sneakers are a big deal in Sweden. Pounding the pavements of the cities or off-roading in the forests requires comfortable footwear but being the cool-conscious people Swedes are, only the historically coolest brands will do. American sports stars and brands make for the best sneaker inspiration.

P – Pär Engsheden. This Swedish atelier not only designed Crown Princess Victoria's wedding gown but has produced numerous dazzling dresses for the royal family including a jaw-dropped red number for Princess Madeleine in 2002. He also scooped a Swedish Elle magazine award in 2011.

Q – Quirky. Sweden's major cities are hotbed for hip and happening hipsters who love nothing more than a quirky trend. Round, John-Lennon-inspired specs with dungagrees and a eccentric moustaches for the men.

R – Rookies. The award handed out to one lucky up-and-coming designer each year by the Swedish Fashion Council (Moderådet). Many past participants in the yearly competition have gone onto show at one of Stockholm's fashion weeks.

S – Stockholm, the centre of Swedish fashion. Birth place of Cheap Monday, Acne, and Filippa K, and the location for Sweden's two biggest fashion weeks. A style city if ever there was one.

T – Tiger of Sweden was founded way back in 1903 in Uddevalla, a small town on the Swedish west coast. The company underwent a brand repositioning in 1993 focusing on 'taking the suit from the bank to the street'. They succeeded. Tiger shows frequently at fashion week and has managed to bridge the gap between luxury and trends.

U – Underwear, namely Björn Borg's. If you're in a major Swedish city you will not escape the might of the tennis ace's bright, colourful, patterned undies. You'll see them in the shops and on the streets – popping out beneath many a low-rise jean – Björn Borgs are the underwear equivalent of Converse. Ubiquitous and worn by all ages.

V – Victoria.  The Crown Princess, that is; not her secret (although Victoria's Secret will also be opening soon in Stockholm). Often under the spotlight for her sense of style – Sweden's number one princess wowed her public in 2010 when she wore a simple but elegant Pär Engsheden gown to wed Prince Daniel Westling. Victoria's style fits neatly in-between refined, classic and chic. W – Whyred. Pronounced as it reads i.e. Why, red. This popular Swedish label was established in 1999 by friends Roland Hjort, Lena Patriksson Keller and Jonas Clason. Hjort’s grandfather is Swedish artist Sven 'X' Erixon. When asked why red was his favourite colour in a radio interview in the 50s, Erixon dryly quipped:'Well, blue then'.

Y – Youngsters. Sweden's universities and colleges are hotbeds for new designer talent: The Swedish School of Textiles from the University of Borås outside Gothenburg and Beckman's College of Design Stockholm are fashion week regulars; the colleges are veritable breaths of fresh air when it comes to intriguing and explosive ideas in an otherwise minimalist-driven style-scape.

Z – Zzzz. Yes, Z is for sleep, the one thing that nobody gets enough of during fashion week!