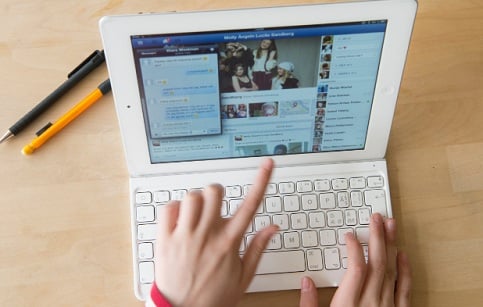 Being Facebook friends with students can be a problem. File photo: Fredrik Sandberg/TT

The teacher in Helsingborg, southern Sweden, was "friends" with certain students on Facebook and Instagram, and would send heart emoticons and comments to them from her personal account. Other students were left wondering why the teacher hadn't accepted their friend requests.

What started as frivolous Facebook fun took a wrong turn when parents heard of bullying in the class, and the perpetrators were the teacher's pets.

"As it turned out, the teacher had a special relationship to the students who were behind the bullying," one parent told local paper Helsingborgs Dagbladet.

"Of course it's not okay to subject students in this way, as this teacher allegedly has done," Edward Jesinger, head of development on Helsingborg's school board, said.

"Our children felt cruelly abandoned," another parent explained.  "Everyone knew, everyone could see who was on the teacher's friend list."

Although parents doubted that the teacher realized the seriousness of her actions, they decided to take matters into their own hands. When the principal wouldn't listen, they went to the city.

The city's guidelines for how the faculty should handle social media are from 2010 – but Jensinger  said it's time for an update.

"This has been an ongoing discussion in schools since Facebook started," he said. "We noticed last autumn that the guidelines were out of date."

The teacher in question was also friends with several of the children's parents, and Jensinger said that the situation may be complicated if a friend's child inadvertently ended up in a class.

However, he recommended that teachers "pause" friendships in that case, or create a teaching account separate from his or her personal account.

The city's new regulations for social media will be released this autumn to avoid future incidents, Jensinger said.