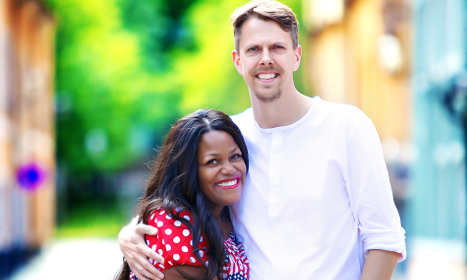 Like many expats in Sweden, LA native Scarlet Vikarby moved here for love.

"We met in the Caribbean and fell madly in love, then a year later, as crazy as it sounds, we got married," she tells The Local.

Eight years later Scarlet, 40, is living in Stockholm with her husband Jimmy and their three daughters.

Vikarby says that moving to Sweden wasn't just a challenge due to the weather difference, but also jumping head first into a new marriage abroad.

"I got here in November and Sweden is not its best during winter," she explains. "The first year was difficult, it was a new marriage and honestly, even if it was a long distance relationship, you don’t really know the person until you start living together."

But she settled in quickly, and before long landed a job as a secretary at an English-speaking advertisement agency. It was a brief position, filling in for a friend, but Vikarby says that even when the work isn't in your field, it's a good idea to get started anywhere.

"It's important to just start networking because Swedes can be very reserved. Contacts are what you really need to get ahead in Sweden," she says.

The American, who has an MBA in International Business, got her real break via a friend in the US who needed help with a big Swedish client. Thanks to her contacts, Vikarby was able to snag a position as a logistics specialist in a Swedish office – which made all the difference.

"It was my first real Swedish job. You really need that on your resume, the experience of working for a Swedish employer and in a Swedish marketplace. That's a reservation that employers always have, wondering if you'll understand the working environment and fit in."

Vikarby said that it's critical to jump on any opportunity you get, even if it's not a job you normally would go for.
"Once you have that first job, it shows that you've been there and done that."
Today, Vikarby and her husband own iHouse, a home automation and theatre installation business.

"You come to us and say what you want, we then plan it out and get the equipment for it," she explains.

Vikarby is responsible for the company's IT and economy, as well as marketing.

"In marketing I think as a woman I bring a different view. Women are not very techy so I know how to speak to them so they can understand, I bring a female perspective to customers."

Vikarby explained that there are of course females who are interested in tech as well, but that generally her company's orders are driven by the men – and she gets a chance to explain to their wives why they may also be interested.

It's an exciting dynamic, as women are also more active in business in general in Sweden than they are in the US, the entrepreneur said. Back home in the US Vikarby was frequently the only female in her department – but she said that's not generally the case here.

"Sometimes I used to think, how are we going to pay the rent? It is hard to have a business in Sweden," she says. "They take a lot of tax and you need a minimum of 50,000 kronor ($7,246) for a private limited company (aktiebolag), which is a lot in capital."

Vikarby clarified that an enskild firma company, with sole proprietorship, is cheaper – but if something goes wrong, you're on your own. Your personal funds are then on the line.

While you must invest 50,000 kronor of capital in private limited company, normally that capital is all that you risk thereafter. If the company goes into bankruptcy, your personal economy will not be affected. Another inescapable difficulty, she says, was mastering the Swedish language.

"I got here on a Sunday and on the Monday I was already in class, I had to be passive and do intensive studying because I was a bit older, " she explains. "It took me a good year to learn it just the solid grammar base alone."

But even with the Swedish language under her belt, she admits that the locals weren't always jumping to help.

"Swedes appreciate when you learn the language, but they are not helping when they speak back in English," she explains. "My husband used to do that because we spoke in English for the first year and a half, he found it strange at first, but you just have to go for it, even if you make mistakes."

On the whole, Vikarby says that life in Sweden is more laid back than back home in California, and that she has built a solid network of friends and family. In fact, one of the things she misses the most may come as a surprise.

"Coming from California, I have to say that I miss the Mexican food," she says with a laugh. "And I miss that the people over there just have a different vibe."

Back in Sweden, the American says that Swedes could learn from the US approach to life, and that many Swedes can be "afraid of taking chances and moving up the ladder".

Indeed, to help other Americans integrate, Vikarby is behind the Facebook group Americans in Sweden, which boasts almost 400 members.

"I want to give back to Americans moving to Sweden because you can feel lonely and it is a journey where you become and new person in a new country."

So, would the American ever pack up and head home?