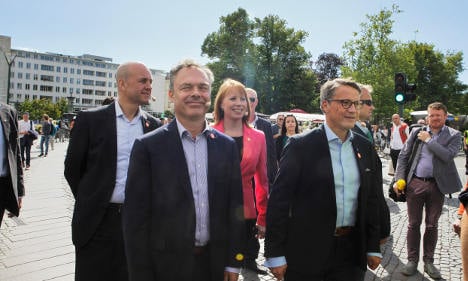 The Alliance leaders. Photo: Drago Prvulovic/TT
When the governing Alliance took to the stage to rally in Helsingborg, southern Sweden, they came out swinging at the red-green opposition.
"Their policies are a sham," Christian Democrat leader Göran Hägglund told the crowd.
In fact, a significant amount of the rally was dedicated to bringing down the red-green bloc, reported the TT news agency.
Prime Minister Fredrik Reinfeldt also chimed in.
"Tell me where I can find the place in Sweden where there's a legitimate alternative to us," he said.
"[The red-greens] don't even know how many parties they'd use to form a government, nor do they know what policies they'd push. The Social Democrats are promising almost everything to everyone. Whatever they miss comes in the form of a promise from the Greens," he added.
"And if there's anything left over, then Jonas Sjöstedt makes his own promises about it," he concluded, referring to the leader of the Left Party (Vänsterpartiet).
Read also: Sweden's complicated elections and how the Sweden Democrats hold the key
He mentioned that the bloc had agreed on 20 billion kronor ($2.9 billion) in increased taxes, but had promised 60 billion kronor in extra spending.
"It just doesn't add up," he protested.
While the governing Alliance is still 7.7 percentage points behind the Red-Green bloc, Södertörn University political scientist Nick Aylott said the mid-September elections were shaping up to be rather interesting indeed.
"The Social Democrats are in a bind and it's tough to see a good way out at this stage. If they stick with just the Greens it'll mean a narrow coalition in terms of parliamentary base, and will make them very vulnerable to pressure and influence from the Left Party," he told The Local.
"At the same time, Löfven is aware that signalling too clearly for a deal with the Centre and Liberal parties will put off a lot of voters who may instead vote for the Left Party or the Feminists. Löfven will play a safe and defensive game all the way. "
"The post-election scenario is just so uncertain."

Photo: Fredrik Persson/TT
The Moderates, meanwhile, have played a few moves that Aylott said nobody could have foreseen, starting with negative campaigning but moving into post-election promises behind the scenes.
"They said that if the Alliance had fewer seats than the left-wing bloc, they'd resign and pass the ball over to Löfven," he explained.
"But they added that they wouldn't make life easy for a new government, especially if there was any doubt about the parliamentary basis of getting the budget through. The upshot is that the Moderates are playing a game of threatening parliamentary instability and chaos in the event of the left parties being bigger than the Alliance."
Another thing the Moderates have done, Aylott mentioned, was tackling immigration head on, with Reinfeldt recently pleading for Swedes to show tolerance in the face of a growing number of refugees.
"They hope this will be a game-changer and will recreate the sense of international insecurity – a climate that applied four years ago in the economic crisis. If they can show that there is international vulnerability then they think the Swedish voters will lean back on an experienced statesman like Reinfeldt, rather than the unpredictable left-wing options," he explained.
But it's not just the two big bulls locking horns, he added.
"Let's not forget the importance of the Sweden Democrats, who look likely again to deprive both the left-wing and right-wing blocs of a parliamentary majority," he said.
"And elsewhere, more exciting stuff will come from the flanks. We can watch the smaller centre-right parties desperately fighting to profile themselves; we can see the Greens riding high, and Gudrun Schyman and Feminist Initiative on the left pulling off all sorts of stunts to leap over the four-percent threshold," he said, adding that she had been largely invisible so far.
"This is a woman who burned 100,000 kronor to make a point. She has an absolute gift for attracting attention. We can probably expect some fireworks there."