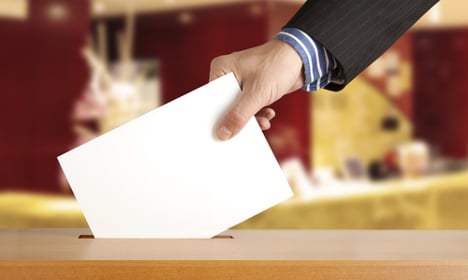 Don't forget to vote. Photo:Shutterstock.
While most Swedes wait until the elections are on the doorstep, the polls are now open for those who've made up their mind already.
But early voting has become all the more popular in Sweden, reported the TT news agency. In the 2010 elections, 39.4 percent of voters cast their ballot early, compared to just 31.8 percent in 2006.
This year, voting cards have been sent out to 7.6 million Swedes. There are around 3,000 spots around the country where they can cast their early votes, too.
Sweden's elections – how do they work? Photo: Shutterstock
Find out where to vote here
The locations are typically schools, libraries, grocery shops, museums, or train stations, and must all have disabled access. Party headquarters and locations with religious affiliations are avoided in Sweden.
In Nyköping, several members of the Moderates Youth Wing camped out overnight in order to ensure the very first votes of 2014 went to the ruling Moderate Party.
"We did it partly because it's a fun thing to do, but also to encourage other young people to take notice," one young Moderate told the TT news agency.
Voting for the county and municipal elections is open to anyone who has live in Sweden for at least three years, while EU citizens can vote locally no matter how long they've lived in Sweden.
The national elections, however, are only open to people with Swedish citizenship.
While the red-green bloc has been leading in recent polls, a political scientist told The Local on Tuesday that these elections are oozing uncertainty. Read his thoughts here.