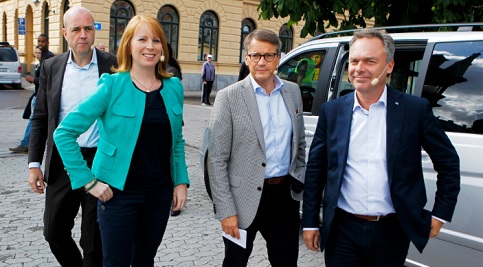 With just 18 days left until elections, things are looking bright for the opposition, who still have a significant lead on the Alliance, new numbers from pollsters Ipsos show.

But despite their lead, red-greens have lost support since the last poll, dropping by about two percentage points. Meanwhile the Alliance, hoping that slow and steady does indeed win the race, has crept forward the same amount.

The situation is complicated however by the fact the three red-green parties, the Social Democrats, the Greens and the Left, have not signed a pre-election pact as they did in 2010. Ideally, Social Democrat leader Stefan Löfven would like to rule without the ex-communist Left Party.

The results of a similar poll by Novus contradicted Ipsos's analysis, showing that the red-green opposition was still gaining support for a total of 49.5 percent, while the Alliance had lost its footing and fallen slightly to 38.4 percent.

Either way, the results are clear: the Alliance must do more to save the game.

"From these results it doesn't look as though Fredrik Reinfeldt succeeded in turning the election campaign inside out," David Ahlin, Ipsos director, told Dagens Nyheter.

Ahlin suggested that Reinfeldt's summer speech in which he asked Swedes to open their hearts for refugees was intended as a game-changer, but it didn't have the impact that the prime minister was hoping for.

"The red-green parties have a significant edge," Ahlin remarked. "Even the support for the Social Democrats and Green Party alone is a bit more than the collective support for all of the Alliance."

The Left Party (Vänsterpartiet) continued to be the weakest of the red-greens, losing ground for the fourth Ipsos poll in a row and winning just 6.6 percent of voter support. The Sweden Democrats moved forward by a hair, gaining 0.2 percentage points, and the Christian Democrats dropped to four percent – a risk zone for their continued place in parliament.