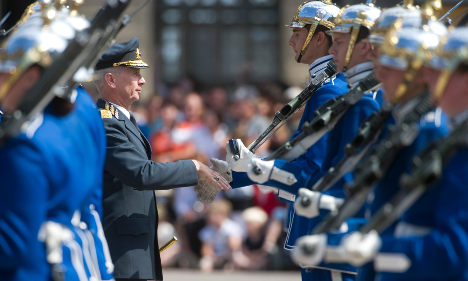 Photo: Fredrik Sandberg/TT
The minister was quick to point out that it wasn't the entire government behind the suggestion, but rather his own Liberal Party (Folkpartiet).
"If the current developments continue with Russia being all the more aggressive, then I can't rule out the need to scale up our defence, meaning we'll need more units," he said in an interview on Sveriges Television (SVT) on Thursday night.
Björklund added that in the case of a threat, Sweden was dependent on Nato for help.
"We need to strengthen the Swedish defence forces, but the truth is that we wouldn't be able to cope if Sweden was put in direct danger," he said.
While Sweden's conscription was scrapped back in 2010 after a 100-year run, Björklund admitted this could have been a wrong move.
"In hindsight, we may decide that this was a mistake in a few years time. We need to up the ante when it comes to our defence force right now."
Björklund was also pressed about why his party planned to abolish the so-called temporary austerity tax (värnskatt), especially considering Sweden's finance minister and prime minister have both mentioned possible tax hikes in the next mandate period.
"We all agree that there is no space for tax reductions any time soon," he responded. "But we want to be honest and say that this is the area where we would start as soon as there is a chance to make cuts."
He added that while many left-wingers may say it's important to fight wealth, he personally thought tackling poverty was a much more important battle.
The Liberal Party is part of the governing Alliance, and recent polls suggest they have between six and seven percent of voter support.
In recent months, the party has made headlines for suggesting that Swedish schools bring back behavioural grades for students, and for trying to introduce a compulsory third month of paternal leave for fathers, even though only a third of Swedes support the idea.
Swedes go to the elections on September 14th. Advance voting is already open to the public.
Sweden's elections – how do they work? Photo: Shutterstock
Find out where to vote here