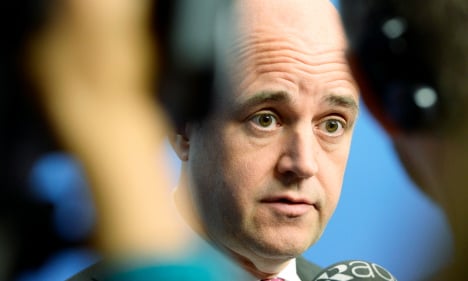 Photo: Bertil Ericson/TT
A poll at the weekend showed the governing centre-right coalition, led by Fredrik Reinfeldt's Moderate Party, lagging more than ten percent behind the opposition in a campaign dominated by jobs, education and welfare.
The left has promised more funding for schools and welfare and accuses the government — which introduced sweeping tax cuts and social welfare reforms since taking power in 2006 — of dismantling Sweden's welfare model, creating the fastest growing income gap in the OECD.
But ahead of a recent election rally in Stockholm, Prime Minister Reinfeldt unexpectedly raised the issue of immigration — in a country where all but one anti-immigration party support generous asylum policies — shifting the focus to an upsurge in refugees from conflict zones.
"I can already say that there will be substantial costs for receiving these people," he told reporters, adding that his party would "promise almost nothing" in the election campaign because of increased budgetary pressures.
"Now I ask the Swedish people to have patience with this. To have solidarity with the world around us."
Left-leaning critics accused the prime minister of using refugees to bring the debate back to the economy where his track record is strong.
Victim of own success
Sweden boasts one of Europe's strongest economies with falling unemployment and 3 percent growth expected next year. The coalition government has also pledged to turn a relatively small 2014 budget deficit of 2.2 percent of GDP to a surplus by 2017 and has attacked the opposition for unrealistic spending promises.
But that may not be enough to convince voters to give them a third time in office.
"There's been a major discussion in Sweden about youth unemployment, problems with schools and railways… and many now consider that the government lacks the answers," said political science professor Ulf Bjereld at Gothenburg University, adding that it is rare to win a third term in office.
Others argue that the government had become a victim of its own economic reforms.
"There's a feel-good factor now that often helps parties on the left," said Stefan Fölster, a former head of the Confederation of Swedish Industry.
"If you have a job, you earn more because of tax cuts, good wage increases and low inflation… There's an impression that we can afford to spend more on welfare, healthcare and schools."
Generous refugee policy
Sweden's migration authority has requested an additional 48 billion kronor ($6.9 billion) — on top of its 91 billion kronor budget for the next four years — to handle an upsurge in refugees, with an estimated 2,000 arriving per week mainly from Syria and Somalia.
The Nordic country, which has one of Europe's most generous refugee policies, expects close to 90,000 refugees this year — numbers not seen since the Balkan wars of the 1990s.
But Social Democratic Party leader Stefan Löfven said it was "undignified" of the government to set refugee reception costs against increased social welfare spending, adding that Sweden could afford both.
"The Swedish model is on the verge of breaking apart," he told AFP on the campaign trail in eastern Sweden.
"They've cut taxes by 140 billion kronor… school results are falling and we've an unemployment insurance system which no longer does what it was designed for."
Until last week, that Social Democrat message dominated election campaign coverage, appearing to strike a chord with voters, many of whom see the government's liberal economic reforms as having run out of steam.
With the anti-immigrant Sweden Democrats (SD) doubling their support since the 2010 general election to ten percent, Loefven said the government risked boosting SD support in an election where the party may hold the balance of power.
"It's partly an election strategy… to show drive and statesmanship," said Professor Bjereld. "They also want to paint a picture of a crisis situation so that voters will support the sitting government.
"But the government also wants to have a generous refugee policy and wants to show they will stand up to the Sweden Democrats."
Reinfeldt denied that warning of rising refugee costs was an election tactic.
"With the situation in the world — probably the highest amount of refugees for 70 years — it would be very odd if that did not affect the Swedish debate," he told AFP.
"I'm not trying to relate to any party. I'm just trying to describe a reality that we are facing."