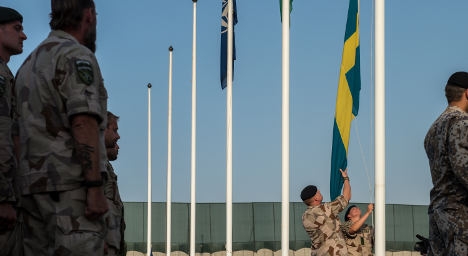 "We have raised the level of readiness at headquarters in particular areas, for example in intelligence gathering," armed forces spokesman Niklas Englund told AFP.

Sweden's military has also decided to move two Gripen fighter jets to the island of Gotland east of the Swedish mainland where they will be in a better position to react quickly to the situation in the Baltic.

Englund said that beyond these measures, there had been no decision to raise the overall alert level for the Swedish armed forces.

"It's a behaviour which we saw during the Cold War and which is now returning," he told Swedish news agency TT.

Fears of a wider confrontation in Ukraine spiralled after NATO said Russia sent at least 1,000 troops across its border helping the ailing pro-Russian insurgency in a counter-offensive that has already seen key towns wrestled from Kiev's control.

"We follow the situation very closely," the Swedish chief of defence staff Jan Salestrand said in a statement posted on the armed forces' website.

Englund said raising the level of readiness at headquarters "happens now and then, but not so often."