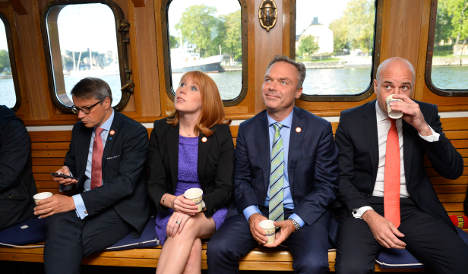 With just under two weeks to go until Sweden's general election, the four leaders of the country's governing Alliance took a boat trip to the Finnboda Shipyard in Nacka just outside Stockholm on Monday morning, where they explained how they planned to rule Sweden if they're voted in for a third term.

Education reforms including smaller class sizes were top of the agenda alongside plans to create 50, 000 jobs and build new homes in Sweden's cities.

Sweden's elections – how do they work?

Prime Minister and Moderate Party leader Fredrik Reinfeldt, Annie Lööf from the Centre Party, Liberal Party leader Jan Björkland and Göran Hägglund from the Christian Democrats all gave speeches before making their full 126-page manifesto available to reporters. It outlines reforms adding up to SEK 9.3 billion for 2015, followed by close to SEK 37 million for the subsequent three years.
Here is The Local's guide to the key points:
Schools Sweden's complicated elections and how the Sweden Democrats hold the key