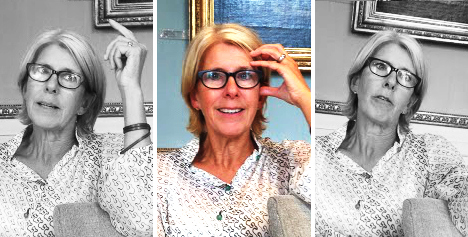 Rembe sits on the other side of an imposing table in a room oozing with history. Chandeliers hang from five-metre high ceilings; gold-leaf trim and stately oil paintings adorn the walls. The windows offer a view of the impressive Royal Palace, just stone's throw away.

It’s from here in Stockholm’s Gamla Stan district that Rembe and her team of roughly 140 staff members work to “advance interest and trust in Sweden”, as she puts it.

But what does that mean, and how does it work? And what role, if any, does this relatively modest government agency have in managing how Sweden is perceived abroad?

David Landes: So what exactly does the Swedish Institute do?

Annika Rembe: The Swedish Institute was established in 1945 just after the Second World War. The Swedish government at the time felt there was a need for Sweden to establish new relations. We needed to reach out and say this is who we are and this is how we wanted to collaborate.

It was true than and it’s true now – you have to establish some knowledge to establish interest and curiosity. And after that you start building relationships, and through relationships you build mutual trust. And trust is so fundamental for everything. Really, I’d say we’re in the trust business.

DL: So was there a lack of trust in Sweden back then?

AR: In 1945, yes, because Sweden hadn't actively taken part in the war. “Where were you?” was one of the questions at the time when our then trade minister visited the United States and was met with a rather cold hand. But that was our policy – to not be involved. That was natural for Sweden and the Swedish people and for the Swedish government at that time.

But in today’s arguably more fragile world, the relevance of reaching out, not to impose your own values and ideas, but reaching out to establish mutual trust and understanding to see what we can do together – that is a relevant today as it was in 1945.

DL: Who creates the image of Sweden?

AR: Well it’s definitely not controlled by any government agency. We can look at it and try to understand it, but there is not one single image of Sweden. It’s a puzzle, and how relevant we are to a specific country or individual depends on the experience they've had with Sweden, Swedish people, products, values, and so on.

DL: Sweden routinely lands at the top of major international rankings and a lot of people say Sweden has a great brand. How do you react when you hear that?

AR: (shaking her head). I do bristle when I hear that. Everyone is talking about place branding these days and I can see how that’s relevant for a city or a region; you have to be on the map because that’s how you attract talent and investment, both of which are very important.

But when it comes to how we at the Swedish Institute should work, we focus on things beyond discussion of nation branding. We live in a globalized world which is also facing very, very big challenges, and there is no country, organization, company, or individual that can solve them single-handedly. What we do isn't about flag waving. It’s about cooperation, collaboration, and co-creation; about sharing responsibility and sharing in the possibility of finding solutions.

DL: That may be true, but are Swedes open to ideas from the outside? I've heard your predecessor, Olle Wästberg, speak about instances where Swedes meet their counterparts from abroad and eagerly tell them about “how we do it in Sweden”, rather than viewing it as an opportunity to learn from others’ experiences.

AR: Well it’s obvious we don’t have all the solutions. Sure, we have lots of good solutions that others could learn from, and we can offer our experiences, but we can never think we have all the answers.

And even when Sweden might be perceived as a role model in a certain area, like gender equality, that doesn't mean we don’t have problems. We've come this far, but we can go even further. And that doesn't mean we can’t talk about our experiences and be relevant as a sounding board for other countries.

DL: There’s an expression I've heard in public diplomacy circles in the United States about programmes that try to show people “the real America, warts and all”. I wonder, what are Sweden’s warts? The things that aren't so pleasant, things you are struggling with?

AR: That’s a great question. Clearly we have not been able to develop our migration or immigration policies how we’d like to. Honestly, this is a country where we want to welcome people; we want to take the responsibility to open the country to people from other countries, regardless for what reason they come.

But we have not been able to move from words to action; to actually do it and this is very sad, and it’s very, very strange for a country like Sweden that is pretty rational, pretty good at organizing ourselves. Why have we not been able to make a good life for these people and also make sure that Sweden benefits and learns from them?

And I think sometimes we might be a little bit slow in appreciating other people’s ideas. On the other hand, I think Swedish education, which is in many ways rightly criticized these days, has nevertheless developed generations of young people that are very, very open to collaborating, to solving things together, which is part of the innovation environment and problem solving atmosphere here, and this is part of our success story.

We’re a very pragmatic people; we want to solve problems; we want to move forward. We want to be inclusive, we want to have people on board and that’s why it’s so sad that we haven’t been able to use all these elements when it comes to immigration.

DL: What advice would you give foreign university students here on scholarship to ensure they get the most out of their time in Sweden?

AR: First, knock on doors and don’t be held back if Swedish people are surprised or taken aback and don’t really respond to openness.

When you move into a new apartment building, for example, go around and introduce yourself. And yeah, some people will be pretty shocked but at the end of the day, you make friends and you learn a lot.

Another thing: ask questions. You are in the lucky position where no one will find it strange if you are asking lots of questions. Sometimes we here in Sweden are ashamed of asking questions because we think we should know everything. We are shy to ask and feel we should probably know it and worried we might make a fools of ourselves. Foreign students don’t have to bear that burden and asking questions opens them up to so much more while they are here.

And one more thing: build up and maintain relationships with your teachers and professors.

And please, be an ambassador for your country. Again, and don’t be offended if Swedish people are a little shy at first. Be sure to try again.

DL: Why does Sweden devote taxpayer money to academic scholarships? What do you say to people who question whether Sweden should be spending money on allowing students from far-away countries to come here and study in Sweden for free?

AR: There are other ways of using public money for sure. We all need schooling, healthcare, and so on, so there are lots of priorities for how to spend taxpayer money.

We fund these scholarship programmes for many reasons. First, education is very important. It brings development and development is crucial. So education is one of the most important things to support. In addition to the importance of education, we know the scholarship holders went through intense competition to get here and that they are likely to be future leaders in their respective fields. They have very high academic credentials; they’re good at what they do, and are likely to be very important in developing their home countries.

Bringing foreign students to our universities is also important for our own students. They get to interact with people from outside Sweden. And is some ways, it’s not about the relationships they may make with Swedes, but that Sweden is responsible for creating the network that allows them to connect with other future leaders from around the world.

DL: How do you respond when people say that the Swedish Institute is just a big propaganda machine?

AR: I do get disappointed. I do believe we carry out our work in a way so that we’re not seen to be a propaganda institution. That being said, I can see why that would be the perception of an organisation like ours. And I do get those reactions, mostly from Swedes actually, who say ‘you are just the public relations arm of Sweden’. And so you just have to go back and say that what we’re really trying to do is establish trust; and it has to be mutual. Because that’s important for working together, and moving forward together to face all these complex challenges facing us.

DL: Will the Swedish Institute become a victim of its own success? Will there ever be a day when there is no need for an organization like this because relations will be so good?

AR: Well, yes, I suppose that would be the vision, but I think that while we’re waiting for that day, the most important thing we can do is strive for a world where people and nations are cooperating towards a sustainable society and where we can be part of that development.