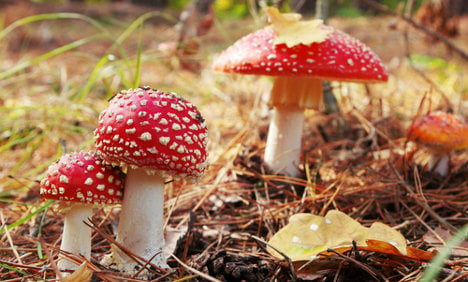 The mushroom in this picture is not the same as the one from the story. Photo: Shutterstock
Mushroom picking season has kicked off, with Swedes flocking to the forests in the hopes of that elusive field of golden chanterelles.
But one mushroom seller on a Gothenburg square was selling a different kind of mushroom – the highly poisonous royal fly agaric, better known to Latin speakers as Amanita regalis (and also called 'The King of Sweden Amanita').
"My mum reacted when she saw the mushrooms in one of the crates," Maja Dolk told the Göteborgs-Posten newspaper (GP).
"We told the seller that they were royal fly mushrooms and that they were poisonous."
The seller, however, didn't remove the fungus from their shelves, prompting the shopper to notify authorities.
A mushroom expert who saw the picture said that he was 100 percent certain the mushrooms were poisonous, and that eating them would cause stomach sickness and hallucinations.
"In my 30 years as a mushroom expert, I'm never even heard of something like this happening," he told GP.
It remains unknown what became of the mushrooms, or whether any Swedes sampled the haul.
Amanita regalis affects the central nervous system and can cause extreme vomiting, nausea, and hallucinations.