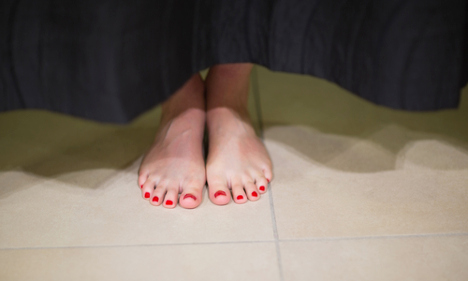 Photo:Shutterstock.
The filming occurred in Norrköping, central Sweden, in March, reported the Dagens Nyheter newspaper (DN).
A 21-year-old woman was trying on clothes in a store's changing room when she noticed a hand under the door holding a mobile phone.
"I panicked. I thought the pictures could end up on the internet," she explained. "I can't even go into changing rooms anymore."
The suspect, who was 16 at the time, was initially charged under a new Swedish law "kränkande fotografering" which was introduced in July last year. It bans secret filming of someone in a private area, such as a bathroom or changing room. A conviction can result in up to two years in prison.
But because of a loophole in the new law, the court ruled that the teenager couldn't be convicted because the woman became aware of what he was doing.
The teen claimed that he wasn't trying to film the woman, but that he was taking a picture of her shoes.
The woman told DN that she was "baffled" by the outcome of the case, but couldn't be bothered to appeal.
Twelve people have been charged under the new laws, 11 men and one woman. It is understood that only one of those 12 has been convicted.