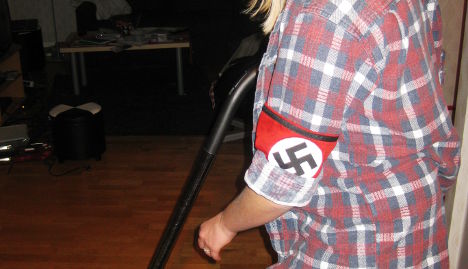 A photo obtained by The Local appears to show Catharina Strandqvist, a soldier and the Sweden Democrats’ top candidate in Halmstad municipality in south-west Sweden, cleaning up after a party with a swastika wrapped around her arm.  The picture is believed to have been taken in 2012.

"Catharina has today announced, after consulting with the party, that she has resigned her candidacies to Halmstad municipal government and Halland county council," said Sweden Democrat spokesman Martin Kinnunen in a statement sent to The Local.

The Sweden Democrats are a far-right party campaigning to cut immigration to Sweden. The group has Nazi roots but its members have sought to distance themselves from their past in recent years. Polls suggest they currently have the support of around ten percent of voters.

Kinnunen said the pictures showed Strandqvist "messing around in a very inappropriate way".

"Catharina is currently far too shocked, sad and regretful to comment further on the incident in the media," said Kinnunen.

"She deeply regrets what happened and wants to sincerely apologize to anyone who took offence at this very inappropriate joke.”

Scandals reminding the party of its past have plagued the Sweden Democrats over the years and Ann-Charlotte Marteus, a leader writer with the Expressen newspaper, was not surprised by Friday's revelations.