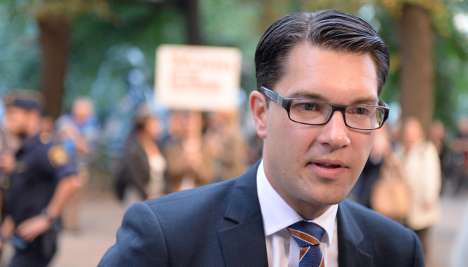 The Sweden Democrats have a young leader and hope to attract young voters. Photo: Jessica Gow/TT
After getting 5.7 percent of the vote and scoring its first 20 seats in the Swedish parliament in 2010, the party repeated its success in elections to the European Parliament in May 2014, securing two spots in Brussels.
Led by Jimmie Åkesson, 35, who joined the party's youth wing as a teenager, the group is focused on attracting first-time voters.
Sweden's elections – who's who?
The party's main goals are to create a "responsible immigration policy, to take vigorous action against crime and ensure that older people have a safe and dignified old age," according to its website.
The Sweden Democrats have frequently accused both the governing Alliance and the other main opposition parties of "irresponsible" spending plans that they say focus too much on helping immigrants instead of Swedish nationals.
Here is The Local's guide to the party's main policies:
Immigration
Health and elderly care