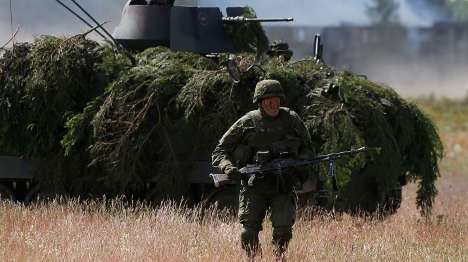 He has suggested that "significant measures" are being considered, which would have "quite a large impact on critical sectors of the Russian economy," in an interview with international broadcaster CNN.

The measures are still being discussed and are expected to be announced by the European Union on Friday.

Leaks from the negotiations suggest that they will include proposals to ban all exports of military equipment to Russia.

Current measures against state-owned banks could also be strengthened and travel bans against a wide range of Russian and Russian-Ukrainian politicians and officials will remain in place.

Sweden's Foreign Minister is at a two-day Nato summit in Newport, Wales in the UK alongside other senior international politicians including the British Prime Minister David Cameron, US President Barack Obama and Ukrainian President Petro Poroshenko.

Western leaders have accused Russia of sending arms and troops to back the rebels in eastern Ukraine. But Moscow denies this.

The fresh sanctions are being debated as talks on a ceasefire get underway between officials from Ukraine and Russia and pro-Russia rebels, who are meeting in Minsk in Belarus.

The tougher punishments against Russia would be introduced if those discussions fail.

More than 2,600 people have died during the five-month conflict in Ukraine.