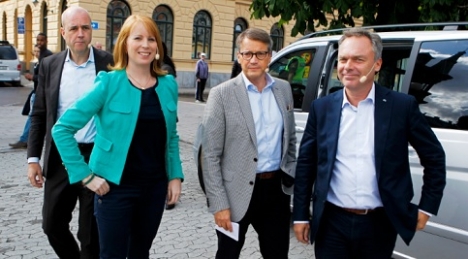 In a week's time Swedes will cast their ballots and the latest poll suggests the race is getting closer.

The Social Democrats, Greens and Left Party clocked up 47.1 percentage points with the current government earning 38.5 in the poll carried out by Novus for Sveriges Radio news bulletin Ekot.

A similar poll done by Novus in August gave the opposition a bigger lead of 11.2. Now the Alliance appears to have closed the gap a little by 2.6 percentage points, with a week of heavy campaigning ahead.

Meanwhile, the new poll backs up what other findings have suggested that the Sweden Democrats will likely hold the balance of power. The party is supported by 10.4 percent of the voting public according to Novus, its highest figure since opinion polls started in 2008.

Political experts have indicated that the Sweden Democrats could hold the key to the election as they are not campaigning with any other party, while the major parties have ruled out going into coalition with them.

A recent survey carried out by Sifo suggested that the opposition would win with a narrow majority. A total of 175 seats are needed for a government to form a majority.

Last week The Local reported that Sweden's Feminist Party could secure enough votes to enter parliament according to a survey.

Sweden holds its general election on September 14th but voters can cast their ballots early with many booths open already across the country.