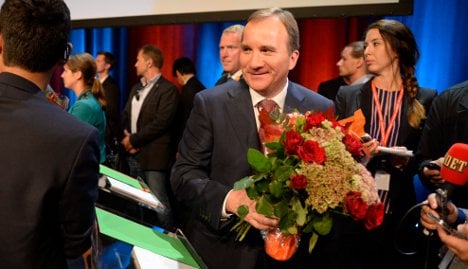 Sweden has eight main political parties, so it is very rare for one party to win an election and form a majority government.

Usually the party with the largest proportion of the vote seeks to form a coalition government with other groups that share some of its values.

The current ruling government – known as the Alliance – is made up of Prime Minister Fredrik Reinfeldt's Moderate Party, the Centre Party, the Christian Democrats and the Liberal Party.

Sweden elections: who's who?

Polls suggest that support for the Moderates has dropped and the Alliance's total share of the vote is now smaller than the combined share of its main rivals – the Social Democrats, the Greens and the Left Party. But the gap between the two blocs has narrowed in recent days.

With the help of political commentator Dr Stig-Björn Ljunggren, we've put together a list of what could happen next:

If the centre-left parties secure a greater share of the vote than the Alliance, and Fredrik Reinfeldt decides to resign as prime minister, Stefan Löfven would seek to take over as Sweden's next Prime Minister and form a coalition government. Although the Social Democrats haven't formally agreed to a Red-Green coalition, Löfven has made it clear the Green Party is his preferred partner, in preference to the Left Party.

The Social Democrats would seek to raise taxes in order to increase benefits and spend more money on public healthcare and education in Sweden. The Green party would also want to influence policies, for example by pushing Sweden's industries to become more environmentally friendly. The Left Party would offer indirect support on many policies. Most people living in Sweden wouldn't notice any dramatic changes straight away.

2. The Social Democrats form a Red-Red-Green coalition, with support from the Left Party as well as the Greens

If the Social Democrats and the Greens don't secure a large enough combined share of the vote, they are expected to team up with Left Party to form a formal three-group coalition. The Left Party would expect concessions such as limiting the privatization of schools and hospitals, more radical increases to benefits and stricter regulation of the labour market to make sure that foreign workers have the same rights as Swedes. People living in Sweden would expect higher taxes.

The Greens and Social Democrats could work with The Left Party's Jonas Sjöstedt (right). Photo: TT

3. The Alliance remains in government with indirect support from the nationalist Sweden Democrats

Fredrik Reinfeldt could stay Prime Minister if the Alliance got enough votes to remain the largest political bloc. But this would probably be the result of a very narrow victory, so the Alliance would need support from the nationalist Sweden Democrats in order to get its policies through parliament.

In fact, this scenario wouldn't differ much from the way the Alliance has governed for the past four years – since 2010 they have been in a minority, and the Sweden Democrats have backed them on most key issues including tax cuts and boosting Sweden's defence budget.

However, on migration policy Reinfeldt has previously sought to isolate the Sweden Democrats by agreeing a deal with the pro-immigration Greens.

The government would remain focused on boosting business in Sweden and allowing private companies to play a role in schools and hospitals. But Fredrik Reinfeldt might make a fresh start by reshuffling his cabinet or creating new government departments

4. The Social Democrats team up with one or more of the current Alliance parties

The Green Party might not agree to a coalition with the Social Democrats, especially if it includes the ex-communist Left Party, which the Greens regard as having radical views in some areas. In this scenario, the Social Democrats would seek an alternative coalition partner or two. We could see Stefan Löfven negotiating with the Centre Party, which is focused on improving infrastructure and jobs in rural areas, or the Liberal Party which typically attracts middle-class voters and has put education at the helm of its campaign.

5. The Moderates form a coalition with the Social Democrats

This is the least likely scenario, comparable to Angela Merkel's fairly successful 'Grand Coalition' with Social Democrats in Germany. But if there was a sudden national crisis, the country's two biggest parties might seek to work together, despite their opposing ideologies. For example if Russia started invading Sweden's Baltic neighbours or the economy crashed unexpectedly, Sweden would be focused on dealing with these issues ahead of debates on welfare or unemployment. The Social Democrats have previously worked with the Moderates during times of crisis such as World War Two.