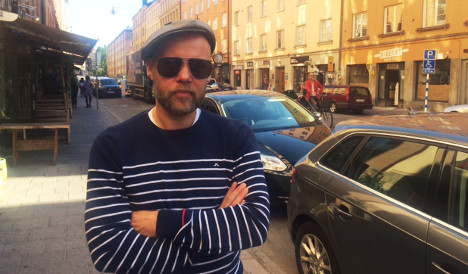 Photo: Oliver Gee
Vogue gushed about the hipster hangout Södermalm, known by the island's locals as just Söder.
“In this day and age, 'cool' and 'Stockholm' are essentially synonymous,” the magazine wrote. “Think: Acne Studios, long-lit summer nights, minimalistic armchairs. Imagine, then, how hip its coolest neighborhood must be.”
It then praises the neighbourhood's vintage boutiques, children's shops, and a magazine shop called Papercut.
But what do the people of Södermalm have to say?
With The Local's offices smack bang in the thick of it all, we ventured outside to find out more.
Firstly, meet Oliver, who works at Stockholms Stadsmission second-hand store. He says it's all about the vintage clothes. “But there's also great bars and awesome food,” he adds.
Anette, meanwhile, said it's become too expensive to live on Söder, but she loves it anyway.
But not everyone is a fan. Meet Linda, who lives further south of Södermalm. “There's too much traffic here,” she laments. “But it's a cool place for artists, musicians, and people in the media to hang out. My great grandparents lived around the corner from here when we met, but they were very poor. It was a whole different place back then.”

Fabian has a lot to say about the area, pointing to the Pet Sounds bar over his shoulder. “That's where it all started,” he explained. “In the nineties, that was the place to meet. And then slowly, the vibe has spread west across the whole island.” Anja, who preferred not to be in the picture, says that Söder is indeed cool for musicians like herself. “There's so much happening here,” she says. “But the problem nowadays is that people seem to be trying to be cool, which has ruined it a bit. Ten years ago, it was much cooler. People today don't even talk to one another because they're trying to be hipper than the next person.”

Below, the store Grandpa, recommended by Vogue.

Pablo, originally from Spain, enjoys the food. “But I don't know if this is among the coolest neighbourhoods in the world. Definitely in Sweden, but not the world,” he says. “There's a massive hipster movement here… everyone has a beard and a bicycle.”

So, what do you think? Is Södermalm as cool as Vogue (and Södermalm residents) seem to think? Let us know in the comments below.