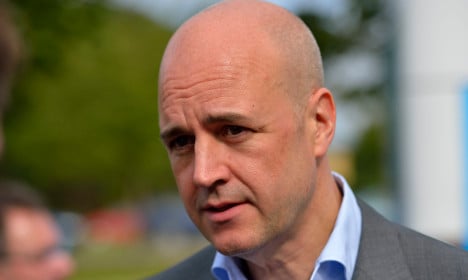 Photo: Henrik Montgomery/TT
It looks like a paradox, but maybe it isn't. The country's economic success has come with a price tag in the form of a growing income gap that many in egalitarian Sweden find far too high.
Under Reinfeldt's leadership, Sweden surpassed Denmark as the EU country with the highest employment rate, at 79.4 percent among people aged 20 to 64, according to Eurostat.
Its 7.8 percent unemployment rate might be higher than in Denmark, Norway or Germany, but is still far below the European average.
Purchasing power is strong and Reinfeldt's government has made a point of lowering taxes while cutting public debt for eight years, with reforms that have been celebrated by liberal economists.
But according to the polls, the Prime Minister looks set to have to hand over this healthy economy to his Social Democratic rivals.
"I voted for them eight years ago but today I'm rather fed up," Bengt Henriques, a 40-year-old telecoms engineer told the AFP news agency.
"They've run this country like it's a company. There are good figures but what's the truth behind that? Of course Sweden has a good track record in terms of employment compared to countries like Italy or Spain. But for some people it's tough today."
For example, Sweden's high youth unemployment rates are often cited by critics of Reinfeldt's policies.
"It's hard for kids out of school to find a proper job. Unemployment is still higher than it used to be," said 40-year-old graphic designer Claes Moren.
Sweden elections: who's who
Egalitarian ideals
The Social Democrats and their candidate for prime minister, Stefan Löfven, have concentrated their attacks on high youth unemployment and tax cuts for companies.
"The (governing right-wing) Alliance has had policies where they wanted people to go out to work, because when they work they can contribute and pay taxes, so that Sweden can afford welfare," said Ann-Cathrine Junger, a political science professor at Södertörn University.
"That hasn't worked for everyone. For example the benefits for those who suffer long-term sickness have been lowered. Social differences have grown rather than shrunk."
An increasing income gap has sparked heated debates among Swedes, largely marked by the egalitarian ideas defended by the Social Democratic governments that have dominated the post-war period.
"Swedes tend to look back," said Lovisa Schill, 39.
"For the economy I don't believe in raising taxes again."
The Swedish left wing is often criticised by conservative voters and the business world for its fiscal policy, in a country where taxes reached a record 65 percent of GDP in 1990, before falling to 52 percent in 2013.
"Moderates have done a very good job for the economy in my opinion. In order for people to work, taxes should be cut, you can't employ them if it costs too much," said 74-year-old Annika Smith.
But she adds that "there are things which could be better in this country: hospitals, elderly care."
Even so, ideological differences between left-wing and right-wing parties in Sweden are often exaggerated, according to Lars Magnusson, political science professor at Uppsala University.
Over the last 20 years, both in office and in the opposition, "Social Democrats have been quite cautious in their fiscal policy," he said.
"They are quite close actually."
Sweden elections: How do they work