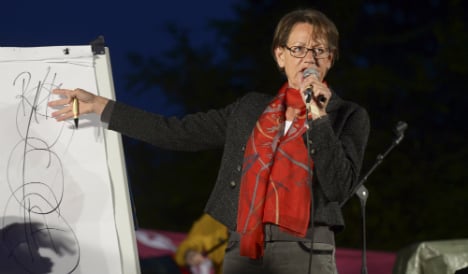 Fi spokesperson Gudrun Schyman at a 'home party' on Friday evening. Photo: TT
According to the latest poll published on Friday evening, the Feminist Initiative (Fi) is currently backed by 3.9 of the electorate while the gap between the leading centre-left opposition parties and the Alliance coalition has increased to 7.6 percent.
The poll, published in the Expressen daily and conducted by Demoscope, indicated that neither side stands to claim a parliamentary majority and thus leave the Sweden Democrats in the role of kingmaker, unless Fi can gain the votes they need.
Sweden elections: Five possible election outcomes
The Swedish election promises to offer an exciting weekend finish with the outcome very much uncertain as the country is set to go to the polling stations on Sunday.
The centre-left lead was confirmed in a second poll on Friday. The Aftonbladet/United Minds poll showed a gap of 6 percentage points between the "Red-Greens" and the Alliance.
While there is no formal coalition between the Social Democrats, Green Party and Left Party, it is likely that the Feminist Initiative would provide backing if they were to get into parliament. Party leader Gudrun Schyman reiterated this week that the party "supports a change of government".
The prospect of a minority government is not unusual in Swedish politics but with the decline of the Social Democrats to below 30 percent of the vote, the traditional party of power will have to share government and ministerial positions with one or more of its prospective partners.
Sweden elections: Who's who in Swedish politics?
Parliamentary rules allow for a minority government to pass its budget as long as there is no alternative which is backed by a greater number of parliamentary seats. This is the dilemma facing both sides as the nationalist Sweden Democrats look set to double their support to above 10 percent, making them the country's third largest political party.
Fredrik Reinfeldt's minority government has denied the Sweden Democrats any influence in government policy and the budget since the 2010 election due an early cross-bloc agreement with the Green Party over immigration and asylum policy.
Despite all the polls indicating an end to the Alliance's control of Swedish politics after an eight year tenure, the Moderates' party secretary Kent Persson seemed unfazed on Friday.
"During the election campaign we made ​​historic progress in public opinion and more than halved the gap in a short time. This is mainly because we put the jobs issue in focus," he told the TT news agency.
Social Democrat party secretary Carin Jämtin meanwhile stressed that no party can feel safe with regards to the election outcome.
"A third of voters had not decided yesterday, at the last election about 10 percent of voters decided on election day," she said.
Sweden elections: How do they work?