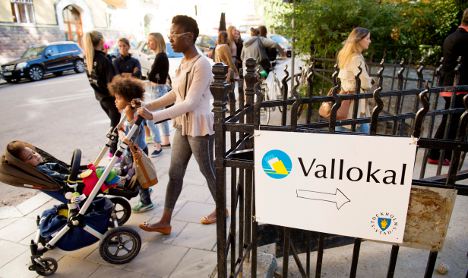 People across Sweden are voting on Sunday. Photo: TT

Stefan Löfven, the leader of the Social Democrats, looks set to become the next prime minister in Sweden, probably in a minority coalition with the support of the Greens and the former communist Left Party. However, some polls have showed the governing Alliance closing the gap.

Polling booths opened at 8am and will close at 8pm, determining the allocation of 349 seats in the Nordic country's legislature, the Riksdag.

According to one survey released on Saturday by Novus, the four Alliance parties scored 40.5 together, against 45.8 percent for the three red-green parties.

Another poll by Skop predicted an even closer result, with 45.4 percent for the red-greens and 42.5 for the Alliance, a gap of just three percent.

On the eve of the election, 57-year-old former welder Löfven admitted that governing the country after the election could be complicated by likely major gains for the anti-immigration Sweden Democrats.

"We indeed have a chance," he said in an interview with Swedish news agency TT Saturday, commenting on the possibility of a red green victory.

"But the question is whether or not it will be with the Sweden Democrats as kingmakers."

On Saturday a poll by Novus suggested that the Sweden Democrats could get 9.6 percent of the vote, up from 5.7 percent in the last election in 2010.

This would make the anti-immigrant party the third-largest in the parliament of a nation that has traditionally taken pride in its welcoming attitude towards foreigners.

"The Sweden Democrats is the only political party that wants to stop immigration," said Anders Sannerstedt, a political scientist at Lund University who has studied the party closely.

"All the other political parties have a united stance, a generous immigration policy. About half the Swedes want to receive fewer refugees."

An electoral gain for the Sweden Democrats and their bespectacled, 35-year-old leader Jimmie Åkesson would confirm a Europe-wide trend of soaring popularity for populist right-wing parties. Sweden elections: Who's who in Swedish politics?

Social Democrat leader Löfven, a former union leader with almost no experience in national politics, has campaigned on a promise to narrow income gaps, invest in infrastructure and improve an ailing educational system.

If the polls are right and he ends up with enough votes to become prime minister, it will mean an end to eight years of government by a four-party conservative-liberal coalition headed by Fredrik Reinfeldt, the 49-year-old leader of the Moderates.

Reinfeldt has been widely credited with steering Sweden through the global financial crisis at the end of the last decade, consolidating its position as arguably the healthiest economy in Europe.

If he is forced out, it will be mainly due to a yearning among the Swedes to see new faces at the top, according to analysts.

"The government is going to change partly because it's the normal functioning of our democracy that after eight years people get fed up," said Lars Magnusson, a professor of political economy at Uppsala University.

With no clear preferences in the Swedish electorate, some observers predicted an ambiguous outcome of the election and days if not weeks of protracted political negotiations to find a workable ruling coalition.

"I think we are going to have a very unclear situation after the election," said Mikael Sundström, a political scientist at Lund University.

"It seems like the ruling coalition, which is a centre-right coalition, won't have a majority. But I think the loosely knit alliance of left leaning parties won't have either."

Parliamentary budgetary rules would allow a minority government to push through its budget however as the opposition would be unlikely to present a combined proposal with the Sweden Democrats.

Despite this fact the situation would force the government to rely on the support of either the Sweden Democrats or possibly the Feminist Initiative who could squeeze past the four percent threshold to claims seats.

The Local will be blogging live from across Stockholm on Sunday, where all the main political parties are holding election night events.