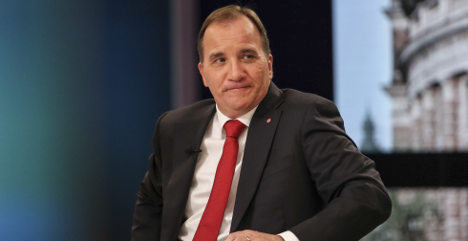 Stefan Löfven: a man with a lot on his plate. Photo: Sören Andersson/TT

Weeks of campaigning are over, the voters have had their say. Social Democrat leader Stefan Löfven on Monday started the job of trying to cobble together a government.

Löfven will be the first Social Democrat in the corridors of power since Göran Persson stepped aside in 2006.

But the administration stepping into Government Offices in Rosenbad will be a very different beast to Persson’s. Löfven's share of the vote is the lowest with which the Social Democrats have ever tried to form a government.

Here are six reasons this election may provide a long-lasting hangover for Stefan Löfven:

1. The Social Democrats only have 31 percent

Under Göran Persson in 2002, the party won 40 percent of the vote. On Sunday, Löfven scraped together 31 percent. The strength of Persson’s position was such that the Social Democrats could rule alone, without having to offer ministerial jobs to Greens or the Left Party. Löfven will be much more reliant on others.

2. Even with the Greens they only have 38 percent

Today, Löfven has started formal negotiations with the Greens about forming a coalition government. The two are divided over questions including nuclear power, infrastructure (the Greens want to shut Stockholm Bromma Airport), but these issues are expected to be fairly easy to settle.

The question is how much of a help the Greens will be: their surprisingly low score of 6.8 only takes Löfven up to 38 percent, below the Alliance’s combined 39.3 percent (not to mention Göran Persson’s 40 percent in 2002).

Sweden has a system of negative parliamentarism – in other words, a government that doesn’t have a majority against it can stay in power. This means that the Greens and Social Democrats could technically form a government by themselves – but it could prove unstable.

Add the Left Party’s 5.7 percent to the equation, and Löfven still doesn’t have a majority, although it brings him a lot closer. But even if the maths could be made to work, what about the politics?

The Left Party campaigned hard for a ban on profits in the taxpayer-funded welfare sector – including schools, hospitals and old-age care. For the Social Democrats and Greens to agree to an outright ban seems unlikely.

For Left Party leader Jonas Sjöstedt to drop the issue would mean a huge loss of face. He would need concessions elsewhere – and it’s hard to see what he could give to the Left Party that wouldn’t put off parties on the other side of the political divide (see next point).

4. The Alliance seems to be holding

“I’m stretching my hand across the dividing line”. This has been Löfven’s mantra, repeated in every TV debate and again in his victory speech on Sunday night. His aim: to get either the Liberals (Folkpartiet) or Centre Party to ditch the Alliance and provide support to his government. The leaders of the Alliance make a joint TV appearances after the election results on Sunday. Photo: Fredrik Persson/TT

This may happen, but there are obstacles: first, both parties have made it clear that if they lost the election they would go into opposition – and they presented a united front with their Alliance colleagues after the election results on Sunday. Second, both would find it hard to cooperate with a government that gave influence to the Left Party, which they view as extreme.

Löfven could ditch the Left, yet swapping them (21 seats) for the Liberals (19 seats) takes Löfven further from a majority. His best hope might be a new leader for the Liberals to take a more flexible line, but there are several months before that’s a serious possibility.

5. The Sweden Democrats vote with the Alliance

The far-right party has more than doubled in size in this election, but more importantly they still hold the balance of power between the two political blocs. Although the outgoing government has never done deals with leader Jimmie Åkesson, the Sweden Democrats have voted with the Alliance in up to 80 percent of votes.

If they continue to do that in the current parliament, the new government could find it hard to get its programme through.

6. The Alliance will present its own budget

Under the Swedish system, each party can present its own budget proposition. The Alliance has said it will present a joint budget this autumn. It is likely to contain provisions for massively increased spending on asylum, which would probably make it hard for the Sweden Democrats to vote for it.

However, an Alliance budget that did gain Sweden Democrat support would likely defeat Löfven’s budget, leading to the collapse of the government.