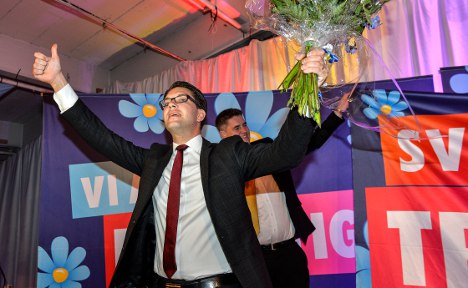 Sweden Democrat leader Jimmie Åkesson celebrates in Stockholm. Photo: TT
Crammed into a former boat house a hundred metres from Stockholm's Abba museum and the city's Gröna Lund theme park, more than a hundred Sweden Democrats screamed and jumped for joy on Sunday night as exit polls suggested they were on course to secure 13 percent of the vote.
Many were in their twenties, dressed in shiny new suits and ties or tight dresses as they drank wine, ate from a buffet of cold meats and waved blue and yellow flags each time their party's results popped up on the projector screen above the main stage.

Young people like Joakim Isheden have flocked to the Sweden Democrats. Photo: Maddy Savage
This was the Sweden Democrats' main post-election gathering and unlike in Sweden's third city Malmö, where journalists have uncovered a number of scandals about party candidates in recent weeks, reporters from across Europe were invited to observe the celebrations.
Our 'press centre' was a dark room directly beneath the main action, with wire bars on the windows and no access to Wi-Fi. But upstairs, as the wine flowed, Sweden Democrat supporters were more than willing to share their views on how the party had managed to double its vote.
"We have a reputation for accepting more immigrants than anywhere else in Europe," said Joakim Isheden, who is on the board of directors for the Sweden Democrat party's youth wing.
"We just can't keep going in the same direction," he added.
Another teenager was more brash in his assessment as he queued up at the bar.
"I know everyone thinks we are racists and yes, it is true, we don't want the immigrants here, but we really are the solution to this country's problems," he said.
The Local's election night blog
So how has a far-right anti-immigration party managed to capture the hearts of around one in eight Swedes in a country with a reputation for Nordic tolerance?
Sweden currently has one of the world's most generous refugee policies. Around 2,000 people seek asylum here every week and the country grants automatic residency to all refugees fleeing the Syria conflict.

Large numbers of refugees and asylum seekers move to Sweden every week. Photo: TT
The Sweden Democrats want a radical overhaul of these laws, arguing money should instead be spent on social welfare and humanitarian aid to cap the numbers arriving in the first place.
None of the other main parties in Sweden have spoken out in favour of cutting immigration, although former Prime Minister Fredrik Reinfeldt did bring up the ongoing costs to the country.
It is a very different political climate to other European countries such as France, Italy or the UK where centre-right parties openly discuss quotas and integration strategies.
The Sweden Democats' election manifesto
Jimmie Åkesson's press spokesman Linus Bylund argues that the party's unique approach to immigration is the key reason for its rapid success since 2010, when it gained its first 20 seats in the Swedish parliament.
"It is obvious that we represent a political line in the sand that is different from all the other parties," he told The Local on Monday.
"We believe that mass immigration and multiculturalism get in the way of our country's development and welfare systems. We cannot afford this." Jimmie Åkesson was relaxed in front of the cameras on election night. Photo: TT
Political Scientist Li Bennich Björkman from Uppsala university says the party's charismatic leader Jimmie Åkesson, 35, has benefited from a slick and organized media campaign and "better organization" within the party in recent years.
He has been particularly successful at attracting votes from young people during a period when unemployment among those aged 15 to 24 has bounced between 20 and 25 percent – about three times higher than overall joblessness in Sweden.
But Björkman says the party has also tapped into a growing frustration bubbling across generations in rural communities in the north and south of the country.
"There is a group of people outside of Sweden's urban cities that feel marginalized," she says.
"The Sweden Democrats are not just about cutting immigration, they represent this wider resistance to the post-modern world and so they attract people that hark back to a different kind of Sweden."
Sweden elections: who's who in politics
"I don't think anything has really changed in Sweden since the last election, it is just that it has become less stigmatized to vote for the Sweden Democrats," she told The Local.
"I don't think all their supporters even want to cut immigration, they just feel they have no other political options to vote for."
In the media and political spheres in Sweden there is much chatter about how the rise of the Sweden Democrats could change global perceptions of the country.
Many are also asking if the party's success could steer former Prime Minister Fredrik Reinfeldt's Moderate Party further to the right.
"Nearly 30 per cent of the Sweden Democrats' new voters came from the Moderate Party and there has already been speculation that a new leader will be chosen to change the party's direction in the light of this," said SVT television's political analyst Margit Silberstein.
In the meantime most commentators agree that while the Sweden Democrats may have secured success at the ballot box, the other parties will work hard to ensure they don't succeed in parliament.
"I really do not think any of the parliamentary parties want to cooperate with the Sweden Democrats," said Silberstein.
"The other politicians will do all they can to keep them isolated".