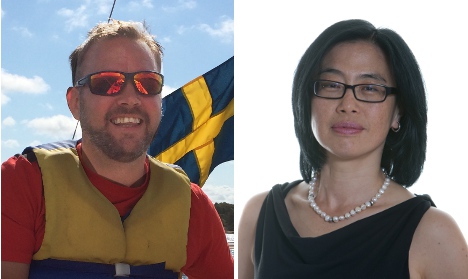 YES says civil servant Kester Gibson 43, who grew up in Scotland and lives in Värmland, Sweden

"I think Scotland has done a good job of running itself already. It has had its own parliament for well over a decade now, so full independence from the rest of the UK in 2014 feels like the next step.
I also agree with the Scottish National Party that the country should look towards Scandinavia for inspiration. Scotland and Sweden are already more similar than some might imagine. Both countries historically support the right to roam and want to protect and enjoy the great outdoors. On the whole, I think both Sweden and Scotland have open minds and arms when it comes to immigration.
Scotland could make better use of its natural resources as Sweden and Norway have done. It could also learn from Sweden's generous welfare and childcare systems which makes it easier for women to have children and go out to work. One of the reasons I have stayed in Sweden is because of the excellent childcare.
In terms of business, Sweden currently has an ethos of entrepreneurship that I would like to see more of in Scotland. I would definitely support closer economic links.
Scottish political parties have also shown that they can collaborate and co-operate in the Scottish parliament, in contrast to the adversarial politics you see in the UK's main chamber in London. So in a way it is embracing the kind of coalition politics we have in Sweden.
Critics of an independent Scotland argue that its financial fortunes would be uncertain, but I think that these economic ripples would be fairly short-lived".

NO says family doctor Mimi Coglianos, 49, who grew up in Stockholm and lives in Edinburgh, Scotland

"I am voting no to independence. Scotland offers excellent healthcare and unlike in England and Wales, university fees are free for Scottish students. Even though the Scottish National Party has said it wants to keep these things in place, we don't know for sure if there would be the money if the country became fully independent. Financial experts have definitely swayed me during the campaign.
I also believe in a closer Europe, not a more divided one, and so I don't support Scotland splitting off and trying to become a separate member of the EU. As I have a very multicultural background (I was adopted from South Korea by Swedish parents), don't like the idea of nationalism driving the agenda in any country. In Scotland you can already sense much hatred for the English.
The Scottish Nationalist Party has talked a lot about trying to emulate Norway or Sweden, but I don't think they have offered enough concrete policy ideas in this area.
I think it would be really difficult to transform Scotland to become more like Scandinavia. Having lived in both Scotland and Sweden, I think the socioeconomic structure is so different and would be tough to change. I love both countries but I just don't think it would work.
I am sure Scotland can learn from Sweden's healthcare system, tolerance and business, but I would like to see it doing so as part of the United Kingdom." Mimi Coglianos (second from right), wants to make sure her Swedish children get free healthcare and education in Scotland