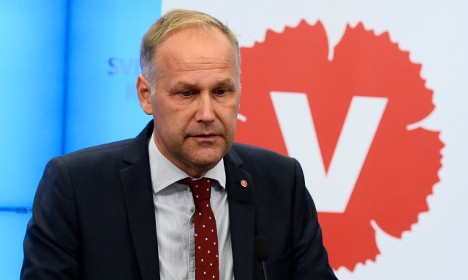 Left Party leader Jonas Sjöstedt. Photo: TT
The day after the Social Democrats won Sweden's national election, party leader Stefan Löfven agreed to form a government with the Green Party (Miljöpartiet).
But the government won't extend any further on the left side of the political spectrum, as Löfven ruled out forming a coalition with the Left Party (Vänsterpartiet) shortly after.
The news may have come as a surprise to Left leader Jonas Sjöstedt, who told The Local on election night that there was "absolutely a very good possibility" of his party being included in the new government.
After a press meeting on Monday night, he explained that Löfven's move was a "huge mistake".
"As soon as we got there – without any discussion whatsoever – we learned that he wasn't interested in ruling with the Left Party," a visibly irritated Sjöstedt told reporters.
"It's deeply regrettable that the Social Democrats have made a huge mistake."

Social Democrat leader Stefan Löfven, right, with the Green Party co-spokespersons. Photo: TT
While Löfven has since told Swedish media that he plans to cooperate on budgetary issues, the Left Party leader wasn't so forgiving.
He told reporters that unless he could be promised a stop to profits in the welfare sector, the party would not cooperate on budgetary issues.
"We will be an opposition party to Stefan Löfven," Sjöstedt added.
Löfven, meanwhile, has a number of headaches to come as he tries to form a government made significantly weaker by the strong results of the national Sweden Democrats, who earned 12.9 percent of the votes.