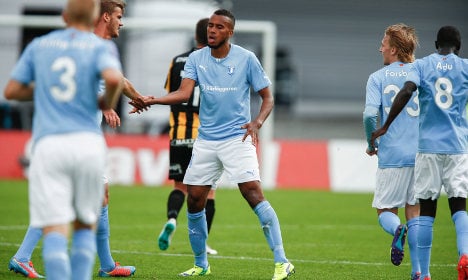 On paper Tuesday's game in Turin looks like an easy win for the Italian side. But Juventus coach Massimiliano Allegri has warned that a victory against Sweden's biggest football club may not come so easily for his side.

The Italian, who succeeded Antonio Conte last month, pointed to Juventus' third-place finish behind Real Madrid and Galatasaray and their failure to qualify last year.

And he believes the fact the Swedish championship started several weeks before Italy's Serie A is a factor that can't be dismissed.

"Last year it was a similar scenario and Juventus were eliminated. It just shows that groups described as easy are not necessarily so," Allegri told reporters.

"Malmö are definitely ahead of us in terms of condition, because their championship is further ahead than ours.

"They are also a well organised team who are physical and are fast. We have to be focused and make sure we don't forget our defensive responsibilities."

A win for Juventus would help ease any early pressure on Allegri, sacked by Milan in January and who has yet to win over large swathes of fans in Turin following three success-laden years under Conte.

Despite being the reigning Swedish champions, Malmö's entry to the competition was given a boost by UEFA's initiative to ensure more European leagues are represented in the tournament proper.

They still had to come three tough qualifying rounds to qualify for the group stages, a feat that no Swedish side has accomplished since Helsingborgs IF in 2000-2001.

"UEFA are right. It's important for teams that have won their league to be represented in the competition. Everyone has the right to participate in the Champions League," said 47-year-old Allegri.

"Reaching the quarter-finals would be an important step for us, but right now we are focused on winning this first game and advancing in the group."