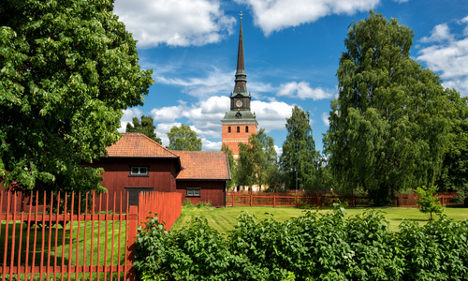 The town of Mora, near where the earthquake hit. Photo: Shutterstock
The quake hit in the afternoon between the towns of Mora and Sveg.
"There was a bloody great bang, it was like a bomb," Åke Hedman near Ljusdal told the Aftonbladet newspaper.
"It was as if there was a lightning bolt directly above me – only ten times worse," the  57-year-old added.
Björn Lund, a seismologist at Uppsala University, said the earthquake is the strongest Sweden has seen since 1904 when an area by the Koster islands was hit by an earthquake measuring 5.5 on the scale.
"Several people have described how their houses shook and how things fell off their desks," Lund told the Dagens Nyheter newspaper.
The tremors were even felt as far away as Finland, reported the YLE newspaper.
An earthquake measuring between 4 and 5 on the Richter scale is considered to be relatively light, with the scale stretching to above nine. This graph shows the moment of impact in Hassela, which is 13 kilometres from the earthquake's epicentre. Photo: TT