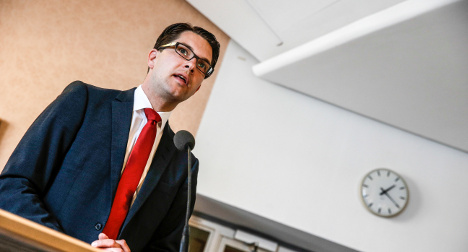 Party leaders have spent the day meeting with Speaker Per Westerberg, whose main role it is to chair debates in Sweden's parliament.

Meanwhile Jimmie Åkesson, who leads the far right anti-immigrant Sweden Democrats has said that his party might support a budget proposal put forward by the opposition, a move that could possibly spark fresh elections.

Sweden elections: who's who in politics

Although the Social Democrats – led by Stefan Löfven – won the largest share of the vote in elections on Sunday and have said they would like to work with the Green Party, a coalition between the two political groups still would not give them a majority in parliament.

The Social Democrat leader Stefan Löfven has already said he will not enter into a formal coalition with the Left Party and the Liberal Party has also ruled out a pact.

This means that the Social Democrats could struggle to secure enough support to push their policies through.

"I've told the Speaker I'm ready to look into the potential of building a government," said Löfven, after his meeting.

"Naturally, I'm aware of the difficult parliamentary situation", he added.

Löfven still needs to be approved by parliament before he can officially take over as Sweden's next Prime Minister. After that, his Social Democrat-led government will have three weeks to come up with a budget proposal, which is the next key stage in the political process.

It is possible that even if Löfven is approved as Prime Minister, his budget may not get passed.

According to news agency TT, the four parties that made up the outgoing Prime Minister Fredrik Reinfeldt's governing Alliance plan to produce their own alternative budget.

The agency reported that Jimmie Åkesson, whose Sweden Democrats won nearly 13 percent of votes, has said he might be open to voting for the Alliance's alternative proposal.

In this case, support for the opposition's budget could be bigger than for a Red-Green budget. In theory, this could cause a parliamentary crisis and trigger fresh elections.

But Nicholas Aylott, a political scientist from Södertörn University told The Local he thought that was unlikely.

"There has been some chatter about this, but I think that no party would want to run the risk of being blamed for triggering a new election that could leave them with fewer politicians than they have now, he said.

He added that the rise of the Sweden Democrats has worried all the other parties and that they would also be concerned about a fresh election putting Jimmie Åkesson's team in an even stronger position.

"Avoiding this scenario is a powerful disincentive for everyone right now", he added.