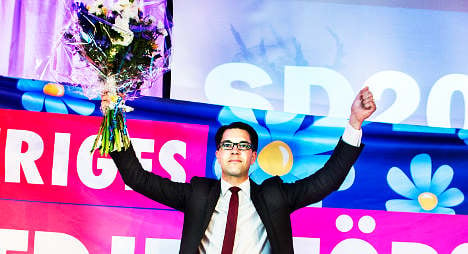 The nationalist party is already seen to have been the biggest winner in an election that pushed Prime Minister Fredrik Reinfeldt's centre-right coalition from government and left Social Democrat head Stefan Löfven struggling to build a new stable coalition.

The Sweden Democrats won 12.9 percent of the vote on Sunday and were expected to get 47 seats. But this will now be bumped up to 49 according to calculations from the Stockholm Mathematics Centre.

The Sweden Democrats will take their seats at the expense of current Housing Minister Stefan Attefall (a Christian Democrat) as well as an as-yet unidentified Liberal Party member of parliament from Gothenburg, Dagens Nyheter reports.

The seat allocation will be adjusted to ensure the Sweden Democrats get enough seats to reflect their overall share of the national vote, and not just seats for members elected directly in each constituency.

A spokeswoman for the Swedish Election Authority told The Local she could not comment on the distribution of leveling seats until the final tally was presented on Saturday.