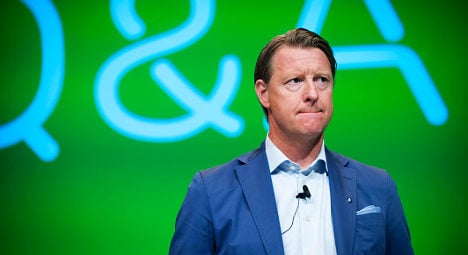 The decision will affect some 1,600 jobs in 14 countries, including almost 700 in Sweden, and will lead to redundancies, according to chief executive Hans Vestberg.

“I have to be honest about it. How many exactly is difficult to say.”

The majority of those affected are employed in Lund, said Vestberg. He added that a new investment by Ericsson in radio networks meant some 500 people would be recruited to work on research and development in the southern city.

The group said in a statement that it would "discontinue future development of modems" but that some of the 1,582 employees affected could be redeployed to new jobs in research and development for radio networks.

The decision marks a strategic shift for Ericsson, following an evaluation of the global modem market which the company said was subject to "strong competition, price erosion and an accelerating pace of technology innovation".

Ericsson took over the production of LTE thin modem's — which smartphones use to access the Internet — after the breakup of a joint operation with the French-Italian microchip manufacturer STMicroelectronics in August 2013.

The company launched its own modem a year later which it will continue to produce.

"The market has fallen. There are fewer and fewer mobile phone makers who buy separate modems — they buy them together with the processors, and we don't have processors," Ericsson's chief executive Hans Vestberg told TT.

"Instead we have decided to focus more on our core business, where we are strongest, and that is radio (wireless) technology."