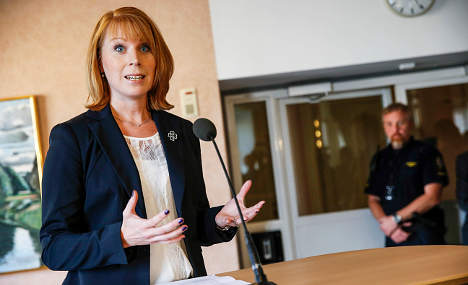 Sunday’s election plunged Sweden into a tricky parliamentary situation, as Prime Minister Fredrik Reinfeldt conceded defeat but the Social Democrats were left needing support from other parties to form a government after amassing just 31.2 percent of the vote.

Stefan Löfven has indicated he would be willing to work with the Liberal and Centre parties, but Liberal leader Jan Björklund and the Centre's Annie Lööf have so far both said they intend to continue working exclusively with the centre-right Alliance.

"All this about an ’outstretched hand’ [from Löfven] is comical. It’s easy to forget how it's been through the years," Lööf told reporters.

"The Social Democrats have tried to bring down the Centre Party and together with the Sweden Democrats they have blocked government proposals from the Alliance.

"They charged us with not having sensible economic policies and with taking apart the Swedish welfare state. Now it’s Stefan Löfven’s responsibility," she told reporters on Wednesday.

All parties will meet on Thursday for the second day running with the parliamentary speaker, Per Westerberg, who will attempt again to help bring about a new government.

A minority Social Democrat-Green government remains the most likely outcome, despite the kingmaker slot held by the Sweden Democrats and Stefan Löfven’s a failure to attract suitors on the centre-right.

Löfven had hoped to split the four-party Alliance that has ruled Sweden since 2006 but Annie Lööf insisted on Thursday morning that she and her three centre-right counterparts were ready for “active opposition”.

While the Alliance parties intend to abstain from a vote on a new prime minister, thereby enabling Stefan Löfven to assume the role, the parties would later present a common budget, Lööf said.

This could present a major headache for Löfven. Sweden Democrat leader Jimmie Åkesson has said his party could consider voting for the budget it considered “least harmful” for Sweden. If his party were to vote with the Alliance in December, this would trigger a government crisis and the prospect of new elections in the spring.

With this precarious balancing act in mind, Annie Lööf said she found it strange that Löfven had been so quick to rule out a government with the Left Party.

“He said no to the Left Party on Monday, despite the fact he is reliant on their support. He needs their support both to win the prime ministerial vote and to present a budget,” she told TV4.

“It’s a difficult situation but it’s our responsibility as politicians to resolve these kinds of situations,” Romson told TV4.

“In this situation it’s all about moving ahead step by step and looking at the issues that are important for each party. It’s then necessary to have a government that keeps as many doors open as possible for cooperation,” she added.

Asked what he hoped the speaker would achieve on Thursday, Fridolin said:

“We hope the speaker gives Stefan Löfven the possibility to form a government. I also hope he has been told that the parties are ready to bury the hatchet,” he said.