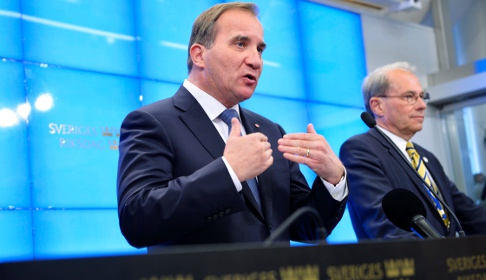 After two days of talks with the leaders of the eight parties in the Riskdag, speaker Per Westeberg said on Thursday afternoon he had tasked Stefan Löfven with putting together a coalition.

“Let me state that this is a complicated election result,” Westerberg said as he gave the Social Democrat head the official go-ahead to put together a cabinet to rule Sweden.

The Social Democrats ruled Sweden for most of the 80-year period leading up to 2006, but the party has spent an unprecedented eight years in opposition.

Sweden elections: who's who in politics

Stefan Löfven stressed again that he wants to forge broad-based agreements across the left-right divide.

“I want to cooperate,” said Löfven, adding he believed the era of bloc politics had served its purpose.

But the Speaker revealed that the four centre-right Alliance parties were unbending in their commitment to stay together.

The leaders of the four parties had told Westerberg they would only abstain from a vote to approve Löfven as prime minister if he could convince them he would be able to get his budget passed.

This has been a sticking point for the Social Democrats, who broke a long-standing gentleman’s agreement by moving to block a segment of the Alliance’s last budget with the support of the Sweden Democrats.

Parties in the Alliance have indicated that they could follow suit if they thought elements of Löfven’s budget were too costly for Sweden.

Löfven must also clear a potential hurdle in the form of Sweden Democrat leader Jimmie Åkesson, who has hinted he would consider voting for the opposition’s budget if he felt Löfven’s plan was harmful for Sweden.

This would potentially trigger new elections next spring.

Stefan Löfven now has until Friday September 26th to report back to the Speaker on the results of his coalition groundwork.

The Social Democrat leader wants to form a minority coalition government with the Green Party.

He will also seek to convince other parties to “take responsibility” and help guide Sweden into next year with a government intact.

“Sweden is too big for major conflicts,” he said.

Löfven has said he is willing to talk to all parties bar the Sweden Democrats, the anti-immigration group that secured a historic 12.9 percent of the vote to become Sweden’s third-largest party.

The party’s leader, Jimmie Åkesson, criticized other parties for refusing to deal with him.

“You don’t have to think like us, but in the current parliamentary situation it’s important to probe the possibilities," he said.