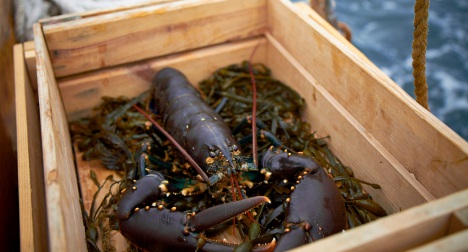 Dotted with red and yellow wooden houses and watched over by the iconic Ursholmen lighthouse, the tiny Koster Archipelago is home to Sweden's most westerly inhabited islands, hidden about eight kilometres off the coast.

The islands host small, serene fishing communities, sparkling in the autumn sunshine. Few cars are allowed on the shores.

But come Monday morning, it will be rush hour. Lobster pots and crates will be stacked up along the water's edge, before the the region's fishermen – watched by the Swedish media – head out to sea on their boats at 7am sharp.

"I am very excited about getting the first catch and it looks like the weather is going to be amazing," fisherman Niklas Nilsson, 28, told The Local.

"This is a really big occasion for people living here, especially the older ones. It is something they look forward to all year."

The succulent crustaceans have been the main source of income for people on the Koster Islands for more than a thousand years.

These days the lobster fishing season is also a major tourist attraction, with Swedes taking vacations to head to the seas and international visitors pulling on their waterproofs and jumping aboard lobster safaris to help with the hauls.

There is a buzz in the restaurants, hotels and cafes on the islands as managers and chefs prepare to buy in some of the first catch and put lobsters back on their menus.

The Local spoke to Stefan von Bothmer, a biologist who runs an organic restaurant in Sweden's first national marine park, Kosterhavet, which incorporates the Koster islands. The park is packed with more than 200 different species of animals and plants that can't be found anywhere else in the country and also works to safeguard the region's fishing industry.

"I've been out and seen people preparing their crates and fishing lines and everything looks perfectly set and ready to go. It's great! We are planning a harvesting party at our cafe in October."

He says he has noticed increasing numbers of visitors arriving from the US and the UK as well as from across Scandinavia.

"This is a place where you can really feel the history of fishing all around you, and I think that is one of the reasons why more people are coming here."


Lobsters can sell for thousands of kronor. Photo: Lisa Nestorson

Current rules mean that fishermen and tourist boats will each be allowed to collect 14 crates of lobsters at a time from Monday morning, as opposed to the 40 that people used be able to gather prior to 2003.

Baby lobsters smaller than eight centimetres long are not allowed to be included, so each crate needs to have a hole in it to make sure they can escape back into the water.

The first lobster snatched from Swedish waters each season is sold at the famed Gothenburg Fish Auction (Göteborgs Fiskauktion).

Last year saw a dip in the price fetched, so fishermen in the area are hoping that the growing spotlight on their industry will help revive interest and revenue.

"I'm hoping that there will be lots of lobsters now that it's warm in the water. Last year it was bad at the start but then it picked up during the season," said Niklas Nilsson, who is one of the youngest fishermen in the area.

He'll be facing friendly rivalry from colleagues based in other fishing villages along the coast of western Sweden, such as Fjallbacka, which is also offering tourist packages this season along with Smögens Havsbad.


Fishermen across Sweden's west coast will search for the first lobster of the season. Photo: Jonas Ingman.

The Local will be blogging live from the Koster Islands from 7.00 on Tuesday morning, so you can get up close to all the action wherever you are reading from.

Our reporter Oliver Gee will be joining the fishermen hoping to score the first catch and tasting some local lobster delicacies. Be warned, you'll be licking your lips for most of the day.

Six West Sweden shellfish adventures you can join this autumn

4. Lysekil oysters and mussel adventure at Vann Spa and Conference

This article was produced by The Local and sponsored by West Sweden
Url copied to clipboard!