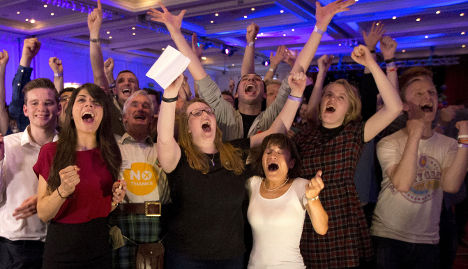 No supporters celebrate victory in Glasgow. Photo: Matt Dunham/AP/TT.
“The United Kingdom stays united. So must Europe,” Bildt tweeted, in an apparent reference to the British government’s future plans for a referendum on the country’s membership of the EU.
Bildt had long made clear his opposition to Scottish independence. As the country went to the polls on Thursday, he warned against the “Balkanisation” of the British Isles.

I hope we will not see the balkanisation of the British isles. Europe and the world needs a strong and vibrant United Kingdom.

Scotland voted by 55 to 45 percent to maintain the 300 year-old union with England, a margin of victory for the No campaign that belied opinion polls that had indicated a much tighter race.
Scandinavia had made repeated appearances in the referendum campaign, with many on the Yes side claiming that an independent Scotland would develop closer links with the Nordic region.
Scandinavia and Scotland: closer links?
Ulf Bjereld, a prominent political scientist with links to the Social Democrats, tweeted on Thursday night that it was “a shame” that Scotland looked likely to reject independence.

Speaking to The Local on Friday, he said:
“I think there’s a certain weakness for Scotland in Sweden. We look at it as the Nordic part of Great Britain.”
But Bjereld also admitted that a vote for separation could have had unwelcome consequences:
“There’s concern in Europe about increased splits. From that perspective we have reason to be happy.”
The pound rose against the krona following the No vote. On Friday morning it stood at 11.69, the highest rate for two months.