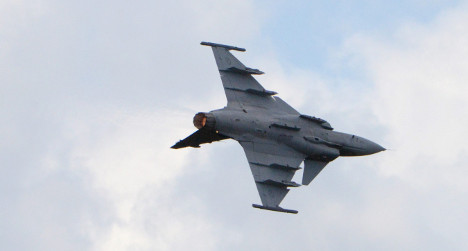 A Gripen plane was scrambled to see off the Russian planes. Photo: Johan Nilsson/TT

The Swedish Armed Forces confirmed on Friday afternoon that two Russian SU24 fighter-bombers had been detected flying over the country.

According to the Foreign Ministry, the planes passed through Swedish airspace to the south of Öland last Wednesday at lunchtime. The planes were one kilometre inside Swedish territory for about 30 seconds.

The Armed Forces had followed the planes' movements and knew where they were, said Gabor Nagy of the Swedish Air Force. The Foreign Ministry said the Russian Ambassador had been summoned so that Sweden could make a formal protest.

Foreign Minister Carl Bildt described the flights as "the most serious aerial incursion by the Russians during my years as foreign minister." Bildt has asked the Armed Forces for a full report into the incident.

Urban Ahlin, foreign affairs spokesman for the Social Democrats, who are expected to form Sweden’s next government, earlier also condemned the flights:

“Obviously we view this with concern,” he said. “If this information is true, it is one of the most serious violations we have seen,” he said in a statement before the incursions were confirmed.

The planes left Swedish airspace after a Swedish Gripen plane was scrambled to warn them off.

“These was more blatant and lasted for a longer time,” Björklund said, adding that there had been a steady increase in Russian activity over a long period.

“There’s an ongoing escalation, which is why I have pointed out the need to strengthen our defence,” he said.