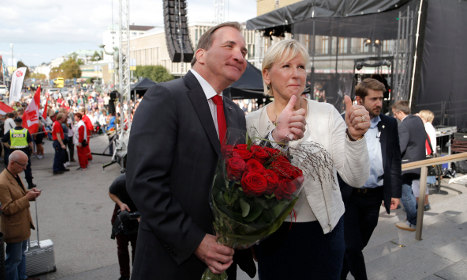 Margot Wallström (right) could become Stefan Löfven's new Minister of Foreign Affairs. Photo: TT
Sweden has a reputation as one of the most egalitarian nations in the world, but although the country has a higher proportion of women in parliament than anywhere else in Europe (around 44 percent), Swedish women don't have an equal share of the top jobs.
Sweden has never had a female prime minister and the outgoing leader Fredrik Reinfeldt's Moderate Party has never been led by a woman.
However, there are signs that the country's political elite is changing.
Sweden elections: who's who in politics?
Centre Party leader Annie Lööf played a key role in the previous governing Alliance. Green Party co-spokesperson Åsa Romson is set to raise her profile as part of Stefan Löfven's anticipated Red-Green government. Although Gudrun Schyman's Feminist Initiative failed to secure its first seats in Sunday's election, she has sharpened equality debates in Sweden in recent months.
If you believe the country's betting companies, there are also a number of new female political appointments on the cards.
Social Democrat Margot Wallström is odds on to become Stefan Löfven's new Minister of Foreign Affairs, one of the most important roles in his cabinet.
The 59-year-old has previously held senior posts at an international level as a European Commissioner and as Special Representative of the UN Secretary-General on Sexual Violence in Conflict. She was a minister in the Swedish parliament in the 1990s. But she shocked many by not standing as party leader after the Social Democrats were pushed out of government in 2006.
"This year there has been a record interest in betting this year, and Wallström is the definite favourite for this spot," Robin Olenius, PR manager at gambling firm Betsson told The Local.
The company makes predictions based on analysis from political experts, population surveys and the number of bets placed on particular individuals.
Political scientist Stig-Björn Ljunggren, who has close links to the Social Democrats agrees with their forecast:
"Margot Wallström is the one that everybody is talking about. People accused her of shying away from stress when she was a minister last time, but now she has much more experience and she knows all the people on the international scene."

Elsewhere, Catharina Elmsäter-Svärd, 48,  is tipped to take over the Moderate Party leadership. The daughter of a single-mother hairdresser, Elmsäter-Svärd would mark a key departure for the centre-right political group. She has already made an impact as Minister for Transport and Infrastructure.
"Like the Social Democrats, the Moderates have a number of strong women waiting in the wings who naturally have the right qualities to get the top jobs. It is not that they will be picked because the parties are trying to increase female numbers," Stig-Björn Ljunggren told The Local.
"But where the Moderates are concerned they will be looking for something fresh after their defeat and I am quite sure that whether it is Elmsäter-Svärd or not, their next leader will be a woman," he added.
Anna Kinberg Batra who is currently representing the party following Reinfeldt's resignation is also being touted as a possible permanent replacement. Tomas Tobé, an entrepreneur who entered politics in 2006 and is openly gay is another possible candidate that would mark a change in direction.
"Catharina is a likely choice because she is very self-confident and popular among other members of the Moderates," said Stig-Björn Ljunggren.

Susanne Eberstein (right) seen here with Crown Princess Victoria is being tipped as Sweden's next Speaker.Photo: TT
The final woman making the headlines in the Swedish press is Social Democrat politician Susanne Eberstein. She has been tipped to take over from Per Westerberg as the next Speaker, whose role it is to chair debates in Sweden's parliament.
The 66-year-old is a lawyer by profession and has been an MP for two decades. She has earned a reputation for trying to stop leaks from major police investigations.
But her political career was damaged in the 1990s when she spoke out against gay adoption, telling Dagens Nyheter:
"Children being adopted by homosexual couples is not easy. We can not allow adoptees to become missionaries for the new family forms".
More recently she has been back in the news because her daughter Anna Eberstein has a child with the British film star Hugh Grant. Earlier this year she told Swedish newspaper Aftonbladet that she was delighted to be getting to know the "wonderful little cute boy". Susanne Ebersrein's daughter Anna (left) has had a child with the actor Hugh Grant. Photo: TT
"There is definitely an interesting shift going on here in Sweden," Robin Olenius told The Local.
"It could be that the Feminists have scared the other parties and they are reacting to that or it may just be the time for some good female politicians to be selected," he added.
"But we can be sure that women will be getting a bigger role in politics here".