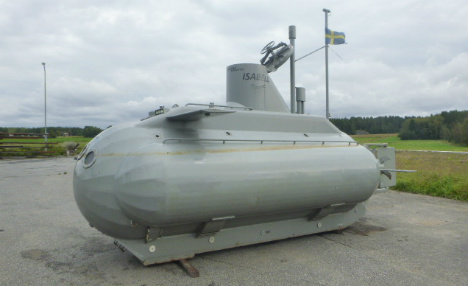 Eric Westerberg,33, from Robertsfors in northern Sweden, made headlines in the Swedish media after building the vessel from scratch.

He built the six metre long submarine, which weighs 8.5 tonnes, over the course of two years. When the build process was complete in 2007 the submarine was launched by then minister for enterprise Maud Olofsson.

After bringing it around the country to display Westerberg decided to put it up for sale, in the hope that it would fetch more than a million kronor.

The submarine, which was given the name Isabelle, eventually fetched 705,000 kronor in an auction website.

"There was a lot of interest in the submarine from many different places. It generated many enquiries. Now we are waiting to see what the new owner wants to do with it and going from there," Per Henriksson, managing director of PS.NU told The Local on Saturday.

A fortnight ago the submarine had attracted a maximum bid of 255,000 kronor. Westerberg himself said he wasn't willing to sell Isabelle for that amount and added that there had been interest from overseas.

When asked if the Swedish navy or perhaps Russia had lodged a bid he quipped; "No, not yet but perhaps Putin or Obama will get in touch," Westerberg told the Norran newspaper.

Westerberg said in a previous interview that he was motivated by the challenge of building his own submarine.

"I googled drawings but found nothing. So I built it with the usual common sense," he said.

The submarine is set to remain in the country after it was snapped up by a business owner in Borås in western Sweden.