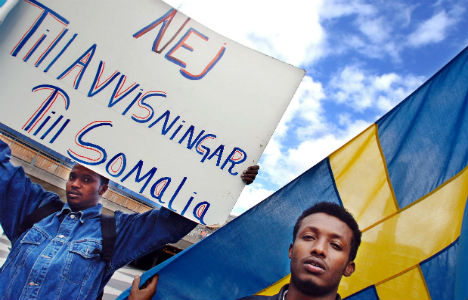 The incident occurred on August 21st in the small municipality of Tomelilla in Skåne. Three brothers from Somali were awoken in the early hours when a window of their apartment was smashed, reports the Ystads Allehanda newspaper.

Stones and a bicycle were thrown through the window. One of the Somali brothers was struck by a board full of nails which landed in his bed.

Neighbours reported that outside the apartment a group of young men shouted a variety of racial slurs at the Somali brothers. One neighbour said that their home was also attacked with stones.

Later, the trio, who were described as being drunk, continued into the square of Tomelilla screaming "Sieg Heil" and "Somalis should die."

Police arrived on the scene and took witness statements from people in the square. They described the atmosphere between the witnesses and the three men as "spiteful" and heard the suspects shouting "Somali lover" at those who later gave statements.

The prosecutor said the men, aged 21,22 and 23, had together gone out and pledged to attack Somalis in Tomelilla.

Two of the suspects reacted violently and attacked the police when they were told to follow them to the station. Another was found to have traces of illegal drugs in his system.

The three will go on trial in the coming weeks facing charges of racial agitation, attempted assault and vandalism.

In 2011 local media in the area reported that a Somali woman and her children had been repeatedly attacked in Tomelilla.