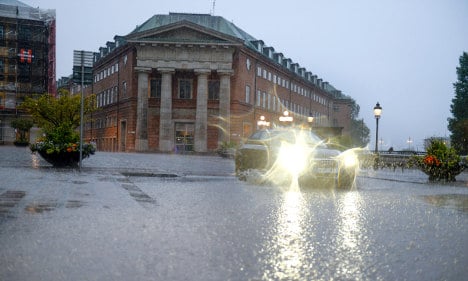 Stockholm was the worst affected area on Sunday, with thunder and lightening hitting the city late afternoon, causing delays on the roads.

Persistent heavy rain, thunder and high winds are expected again on Monday around the Swedish capital and parts of the Baltic coast, according to the Swedish Meteorological and Hydrological Institute (SMHI)

"Autumn has made ​​its entry and during the week, temperatures will remain at around 10C the south and 2-8C in the North. There will also be a wet start to the week," SMHI meteorologist Sofia Söderberg told newspaper Dagens Nyheter.

She also warned that there could be flooding around Sweden's biggest city:

"There will be more persistent rain which then might not have time to drain away because the system is already filled with water."
Uppland, Ökand and Gotland are expected to be worst affected by blustery winds.
The bad weather comes less than a month after extreme rain caused flooding Skåne in southern Sweden.
Meanwhile more snow is expected in northern Sweden, where residents were forced to get their shovels out on Sunday after the biggest snowfall this season.