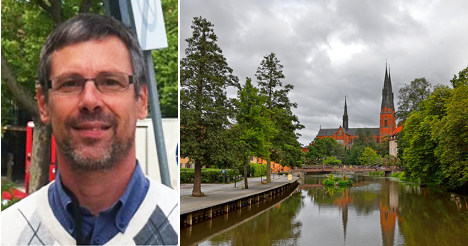 The man who was born David Hemler could not show an American passport or any other photo ID and this meant Sweden could not give him his old identity back, the administrative court of appeal said.

“It feels like I’m in a hopeless situation,” said Hemler when informed by The Local that his appeal had been rejected.

He has tried three times to get his personal details changed after making up a fake identity – Hans Schwarz – when he first arrived in Sweden.

US airman emerges in Sweden after 28 years

David Hemler, 51, deserted from a US Air Force Base in Germany in 1984. He spent almost three decades on the Air Force's most-wanted list and is still wanted as a fugitive by the US military.

“It’s so frustrating that there are no alternatives for me in Sweden. The US Air Force has confirmed my identity and said I can pick up an ID card at a base in Germany, but I don’t dare.

“And if I go to the US Embassy here I could be taken. I’ve been told I can get a maximum prison sentence of five years,” said the Pennsylvania native.

In what would have been an ironic twist, Hemler had hoped the US Air Force’s ‘wanted’ notice would help convince the authorities in Sweden.

“It has a picture and it names me as David Hemler, alias Hans Schwarz.”

The fictitious name comes from the first and last names of two friends he had in Germany.

On arrival in Sweden 30 years ago, he made up a story that he had run away from his parents while they were traveling. He is registered in Sweden as being born in Zurich, but with unspecified citizenship. He received a Swedish residence permit in 1986.

Hemler has three children in Sweden and works in Uppsala as a statistician with the national health board.

He has a 24-year-old daughter from a previous relationship, who uses her mother’s last name. He also has two young children, aged four and five.

He has not left Sweden since coming out with his story two years ago.

“I can’t trust any country. I haven’t even been on a boat trip to Finland, since it’s possible Finland would extradite me.”

Two years ago, after 28 years of silence, he finally spoke to his parents again.

Fear that someone in the US might turn him in was one of the reasons why he never contacted his parents to explain that he was alive and well in Sweden.

But after assurances from lawyers that his Swedish residence permit wouldn't be revoked and that extradition to the United States was out of the question, Hemler contacted US officials to alert them as to his whereabouts.

“It was wonderful. I didn’t even know if they were still living,” said Hemler.

Their reaction surprised and delighted him.

“They accept me, which is something I had never imagined. There are a lot of deserters from Vietnam whose parents say they don’t have a son.

“Some of my wider family are Tea Party Republicans. They support war efforts but they don’t turn their back on relatives.

“My parents have been here three times now and we speak every week on Skype.”

After years of hiding his true identity, he also came clean to friends and workmates. Hemler said it felt strange now to still use the name Hans Schwarz for work correspondence when the truth was out.

In October 1984, David Hemler was a 21-year-old airman when he abandoned the US Air Force's 6913th Electronic Security Squadron in Augsburg, Germany and eventually made his way to Stockholm.

Once settled in Sweden, Hemler worked at a hamburger restaurant and within geriatric care before eventually enrolling in university in 1994.

While living a comfortable yet secret life in Sweden, he become a wanted man, listed as a fugitive by the US Air Force Office of Special Investigations (AFOSI).

Hemler's decision to leave the US Air Force without permission back in 1984 was due in part to his growing pacifism, he said. Shortly after enlisting, he met a girl whom he had intended to marry and who was a member of a peace church.

He also disliked military life and was uncomfortable with foreign policy under President Ronald Reagan.

"The US backed the rebels in Afghanistan and Reagan supported apartheid. In Europe people were out demonstrating on the streets, but US personnel were forbidden from demonstrating.

"I asked for a discharge and they ignored it. After a year I left the base and hitchhiked to Sweden."

AFOSI has said it would let him return to Sweden if he agreed to take a lie-detector test in Germany, said Hemler. But a Swedish prosecutor and Hemler's lawyer both informed him Sweden did not accept lie-detector tests.

He also expressed concern about how the US viewed his motives for deserting and was worried officials would “over-analyze” any answers he gave.

“I was suspected of a strange thing. In the late 1980s there was a car bombing at a US military base in Frankfurt. One person died, and they thought it was me until they identified the body.

“This idea of what they think I am is spooky.”

Hemler said he would confer with this lawyer before deciding whether to try for a fourth time to have his identity reinstated.