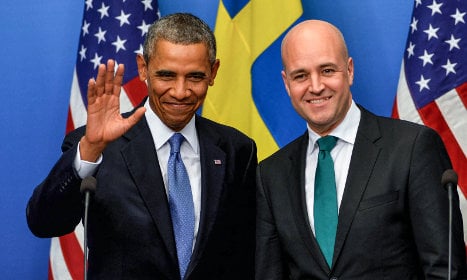 Fredrik Reinfeldt after a previous meeting in the US. Photo: TT

Reinfeldt announced on Sunday 14 September that he would resign both as Prime Minister and as leader of the Moderate Party.

The announcement was met with disappointment from many within his party. Some members have openly criticised him for making a speedy exit during a complex political period.

The Moderates and the three other centre-right parties that made up the former governing Alliance are planning to put forward a parliamentary budget to rival that being proposed by Stefan Löfven's Social Democrat-led coalition. If this were to be agreed by parliament, it could even trigger fresh elections.

Meanwhile Moderate Party members are busy debating who could become their next leader.

Against this background, Fredrik Reinfeldt can expect to answer plenty of questions about Swedish domestic politics when he holds a press conference in New York later along with outgoing Foreign Minister Carl Bildt, Minister for the Environment Lena Ek and International Development Minister Hillevi Engström.

The main purpose of their New York visit is to provide support for Sweden's candidacy for the UN Security Council from 2017 to 2018.

Reinfeldt will also attend the opening of the General Assembly and a UN Security Council meeting, at the invitation of President Barack Obama.