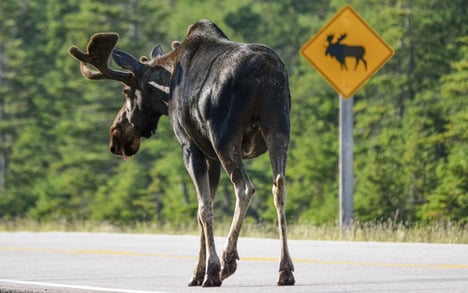 But a dozen scientists quashed the entire concept on Wednesday in a story published by Sveriges Radio (SR).
Their reasoning? That elks are simply too large to be affected by the small number of fermented apples they're eating. Indeed, an adult elk can weigh up to 700 kilogrammes.
Petter Kjellander, a professor at the Swedish University of Agricultural Sciences, was one of the scientist contacted by the radio.
"I must confess, I'm not an elk expert, but I am a professor in wildlife in ecology and I know some stuff about them," he told The Local.
"The thing is, if something had been proven then I would have seen it. It's just a rumour, as far as I can tell, no trustworthy source has ever shown it to be true."
He said the elks fearlessly wandering into people's gardens was just an example of habituation.
"Perhaps they're not drunk, they just appear drunk because they're not afraid of people," he explained.
"In the fall in Sweden, the elks simply show up. Apples are attractive to them, so it's no surprise they go for them. I think there's a natural explanation to all this that doesn't involve alcohol."
Myth or not, with the apples fermenting and the elk on the move, Swedish media is surely set to move into silly season soon. At least when it comes to elks.