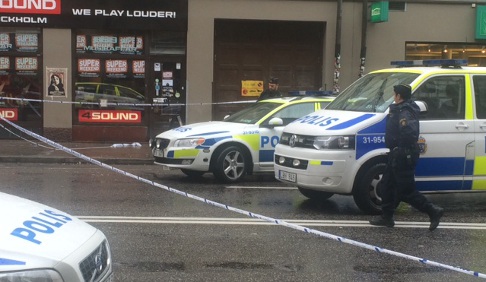 There is police activity on Götgatan in Stockholm. Photo: Oliver Gee
KEY POINTS:
Police have confirmed that an exchange bureau in Gullmarsplan in southern Stockholm was robbed on Thursday morning, while there was a failed robbery attempt at nearby Medborgarplatsen.
Witnesses reported seeing masked men fleeing from both locations at around 10am.
In Gullmarsplan, one of the suspects had a "pistol-like object in his hand," according to a passerby who spoke to Swedish newspaper Dagens Nyheter.
The man was seen getting on a moped and heading south.
No-one is understood to have been harmed in either location. Police say it is still unclear if the two events are connected. Police cars on Södermalm's Folkungagatan. Photo: Oliver Gee
Lars Byström from Stockholm Police confirmed that the Gullmarsplan hit had been successful.
"I can now confirm that there was a successful aggravated robbery in Gullmarsplan and our forensics team is on the scene," he told The Local in the early afternoon.
He would not be drawn on how much money had been taken, but he added that robbers had escaped empty handed from the second bureau on Götgatan, Södermalm's main shopping street.
He refused to comment on the details of the successful heist, nor how much money the robbers got away with.
"It's hard to say if the two are connected. Anyone who has seen or heard anything, please contact the police on 11414," he added.
At midday The Local's Oliver Gee reported hearing a "loud bang" in the area after police called on people in the neighbourhood to stay indoors and take cover.
Police have confirmed this was a controlled explosion carried out by a bomb squad.
"This will scare people in Sweden," another witness told our reporter.
The green line on Stockholm's Metro was hit by lengthy delays as subway stations on Södermalm were all closed to the public.

Large parts of central Södermalm were cordoned off for several hours, and it wasn't until 2pm that the roads were opened again.
But earlier in the day there were scuffles around Götgatan.
"Irritated members of the public keep trying to creep under the tape, so that they can access the Medborgarplatsen subway stop, " The Local's Oliver Gee observed at around 11am.
"Officers are becoming increasingly irate that the people aren't taking the police tape seriously," he added.
Our reporter also filmed officers trying to move people away from the scene, with one appearing to push a child.
Central Stockholm was also on lockdown in June after a man claiming to have a bomb strapped to his body walked into a building in the city's Old Town.
In December 2010, central Stockholm was hit by a suicide bomb attack, although only the bomber was killed.