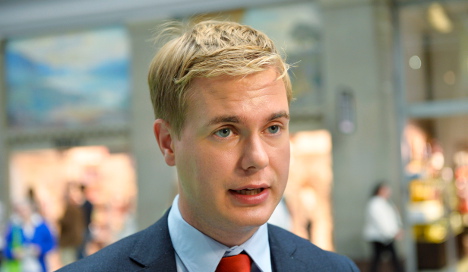 Gustav Fridolin, 31, is the Green Party co-spokesperson. Photo: TT
Following national elections on September 14, figures released by Statistics Sweden show that Sweden's parliamentary members are on average two years younger than they were after the 2010 elections, when the average was 43.
"This is the youngest parliament ever in the history of Sweden's democracy," election statistician Richard Öhrvall told the TT news agency.
Sweden has seen the age of its politicians dropping steadily over the past few decades. Back in 1991, the average was over 50.
In 2014, the party with the youngest average age is the nationalist Sweden Democrats. Over one in three of its politicians are under the age of 35, with 39 the average age for elected representatives.