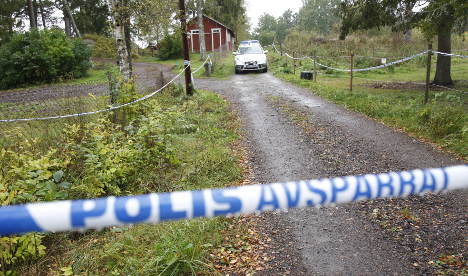 The farm where the shootings happened has been cordoned off. Photo: TT
Police were alerted to the property, which is around 25 kilometres south of Uppsala, just after 11pm on Wednesday night.
They found a 17-year-old boy dead and a 16-year-old seriously injured.
"It was a terrible scene for the officers who arrived there. They discovered one guy dead and the other one – the younger one – was so badly hurt," Christer Nordström, a spokesperson for Uppsala police told The Local.
The 16-year-old was taken to Akadamiska hospital in Uppsala where he later died.
According television reports on Swedish network SVT, officers suspect that one of the teenagers shot the other before turning the gun on himself.
Police would not confirm this to The Local but Christer Nordström said: "It is true that the boys were good friends".
One of the boys is registered as living at the rural farmhouse although officers said it was unclear whether he was currently staying there.
Both of the teenagers' families have been informed of their deaths, but police have not released their names.
Officers are currently carrying out interviews in the area. They have cordoned off the farm and according to Christer Nordström, there is likely to be a strong police presence there "for at least another few days".
"There are still so many questions which have not been answered," said Nordstöm.